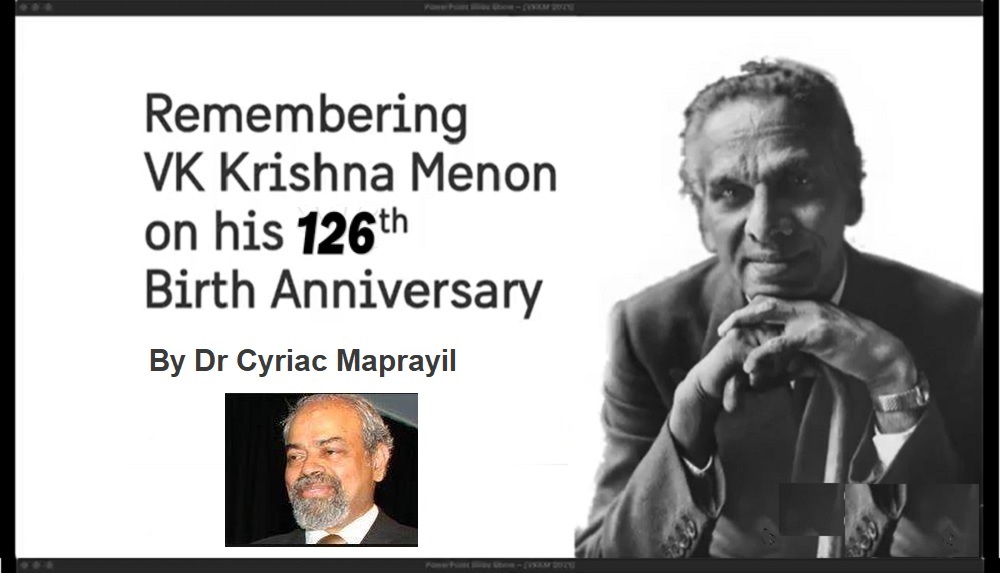 LONDON May 3: Indians of all ages recall with pride the titanic achievements, domestic and international, of the First Government of Independent India. In their capacity as architects of the admirable doctrine of moral, as opposed to physical force, Nehru and Menon played a crucial role in getting the two power blocs, capitalist and communist, to recognise that the alternative to peaceful coexistence and negotiations to sort out the thorny problems, would be a nuclear war. Nehru was never a Communist, nor was Krishna Menon.

Nevertheless, they were defiantly anti-imperialist, even if it meant offending the USSR and the USA. They refused to align themselves with either bloc, much to the annoyance of America and the Soviet Union. As a result, the newly independent republics of Asia and Africa remained non-aligned, winning the respect of both superpowers in their efforts to foster and preserve world peace.

As a result, the non-aligned movement came into existence. From its inception, the movement opposed the development of military blocs and attempts by the major powers to compartmentalise the world into spheres of influence. Unfortunately, the non-aligned movement is no longer able to negotiate as impartial outsiders, leaving the UN with even more responsibility to negotiate proactively in the face of crises like the present one centred around Ukraine and Russia.

Prior to his role in Nehru’s Government, Menon was India’s unofficial Ambassador to Britain – he was the leader of the opposition to the continuing British rule of India. In this role, he educated British public opinion and won over many influential British politicians across the political parties and other decision-makers to his cause. His creation, the India League, was a powerful weapon in India’s propaganda war against British Imperialist rule.

According to Prime Minister James Callaghan, Menon was “the embodiment of the movement within Britain for India’s freedom”. Along with his campaign for Indian independence as an elected councillor in the Borough of St Pancras, Menon worked selflessly and tirelessly to bring about social and economic justice. In recognition of his distinguished services, he received the Freedom of the Borough.

After independence, Nehru and Krishna Menon embraced social democracy, which they believed – with its emphasis on public and private ownership – would help create a more equitable India.

The commanding heights of the economy were controlled by the Government, although private enterprise was encouraged. Krishna Menon’s contribution to the Commonwealth was finding a solution to ensure India’s status as a Republic free of allegiance to the Crown.

English Heritage has marked Krishna Menon’s time in the UK with the unveiling of a Blue Plaque at his former London home in Highgate.