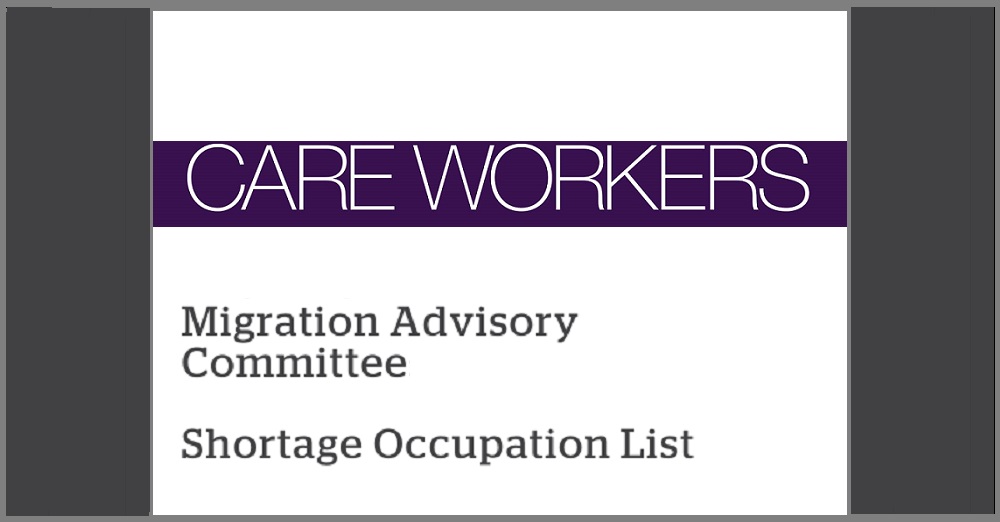 LONDON Dec 19: UK Immigration Rules for care workers should be relaxed “immediately” to reduce “severe and increasing difficulties” the sector is facing with recruitment and retention, the Migration Advisory Committee (MAC) warned.

In its annual report, the MAC, which gives recommendations Government on immigration, advised that the jobs be made eligible for the Health and Care Visa and placed on the shortage occupation list (SOL).

The SOL helps employers and migrants gain sufficient points to obtain work visas to fill jobs where there are proven shortages, as advised by the MAC.

The recommendation follows findings from an independent review from the MAC on the effect ending freedom of movement after Brexit is having on the social care sector and its workers.

Campaigners have accused the Government of excluding care workers from its new immigration system and ignoring the role they have played during the coronavirus pandemic.

The MAC’s annual report said: “Given the severe and increasing difficulties the sector is facing in terms of both recruitment and retention, we are recommending that care worker jobs immediately be made eligible for the Health and Care Visa and placed on the shortage occupation list.”

The committee said that, while it did not believe immigration policy could solve all – or even most – of the sector’s workforce problems, it could “potentially help to alleviate the difficulties” in the short term.

Asylum seekers should be allowed to work

The MAC also advised the Government to “review the ban on employment for asylum seekers”.

“There is clear evidence of the harm that this causes, some of which we document in this report, and little evidence that we are aware of that it provides significant benefits,” the MAC said.

“The harm is exacerbated by the increasing numbers of asylum seekers who are having to wait over six months for an initial decision on their application.”

People are prohibited from working in the UK while their asylum claims are pending, which can be 12 months or more. However, if they are still waiting for a decision after 12 months, they may apply for permission to work – but they can only take jobs on the SOL.

The MAC argued in its annual report that this can cause asylum seekers to become “disengaged” with the market, making it harder for them to integrate if their claims are successful.

The committee said the Home Office had “tended to argue for an employment ban for asylum seekers due to the so-called ‘pull factor’”.

“The argument is that asylum seekers may choose to come to the UK over other safe countries because of the attractiveness of the labour market,” it said.

The Government could utilise the asylum workforce to fill vacancies in the social care sector.

Professor Martin Green, chief executive of Care England, said the organisation was “very” pleased that the MAC had recommended care worker jobs were added to the SOL.

The Homecare Association also said it “strongly” endorsed the suggestion.

Chief executive Dr Jane Townson said: “Changes to migration policy are needed urgently, as part of a wider range of approaches to increasing workforce capacity, to help ensure we have sufficient committed and skilled care workers to provide the quality of support we and our loved ones expect and deserve.”