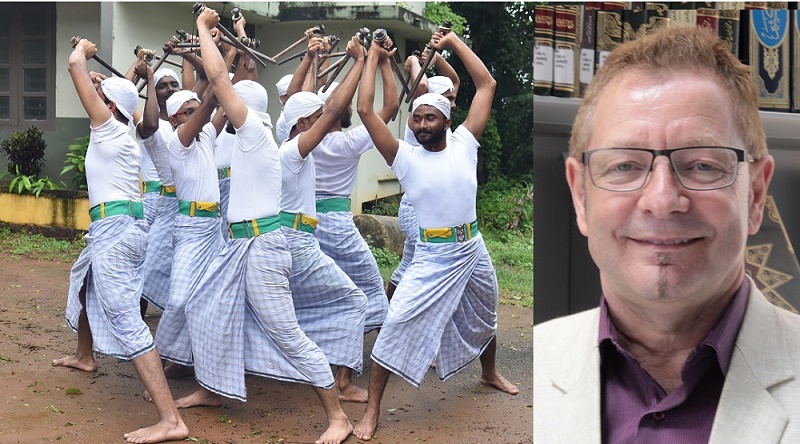 Rolf Killius, an ethnomusicologist and oral historian started a project to document the music, dance and religious musical expressions of the Mappila community which is the subsection of the Muslim community in Kerala, mainly settled in the north and along the coastlines of the Indian state.

The project is set up in collaboration with Vayali, an independent cultural group of young activists in Kerala, and with the World and Traditional Music Section of the British Library.

The research takes importance as the Mappila community is one of the oldest Muslim communities in India and has roots in the Arabic Gulf Region and the Indian Subcontinent Mappila’s music deserves a special research interest.

Today members of this community have settled in the Arabic states along the Gulf. They are descendants of Arab seafarers and Indian women and their main habitats till today are the coastal region of northern Kerala.Some of the Maplah music genres still practiced are: arabana muttu, opana, kolkali, daffu muttu and mappila pattu.

Following the community’s history at the crossroads between the Gulf and South India the musical genres practiced by the Mappila are in several ways linked to and influenced by the Muslim-Arab culture be it through the Arabic language, the Muslim-devotional character of the lyrics, or the musical instruments used.

In India they are one of the earliest Muslim communities, their mother tongue is the Dravidian (south Indian) language Malayalam, and are regarded as an important part of the multi-religious society in Kerala.

As Muslims their religious contacts to southern Arabia were always far greater than to the people practicing Islam in northern India.

For their knowledge of the Arabic language, the common Muslim belief system and their historical connection to the Arabian Peninsula they constitute one of the largest Indian communities settled in Kuwait, Oman, Qatar, UAE, Bahrain and Saudi Arabia.

He works in exhibition curating, academic research, music and sound production, film production and editing and oral history. Rolf, a German-born British resident, has lived in Germany, Qatar, Switzerland and India and presently divides his time between London, UK and India.

Those who would like to make contacts with Rolf Kilius please email him on rolfkillius@yahoo.com or visit him on http://www.rolfkillius.com/index.html