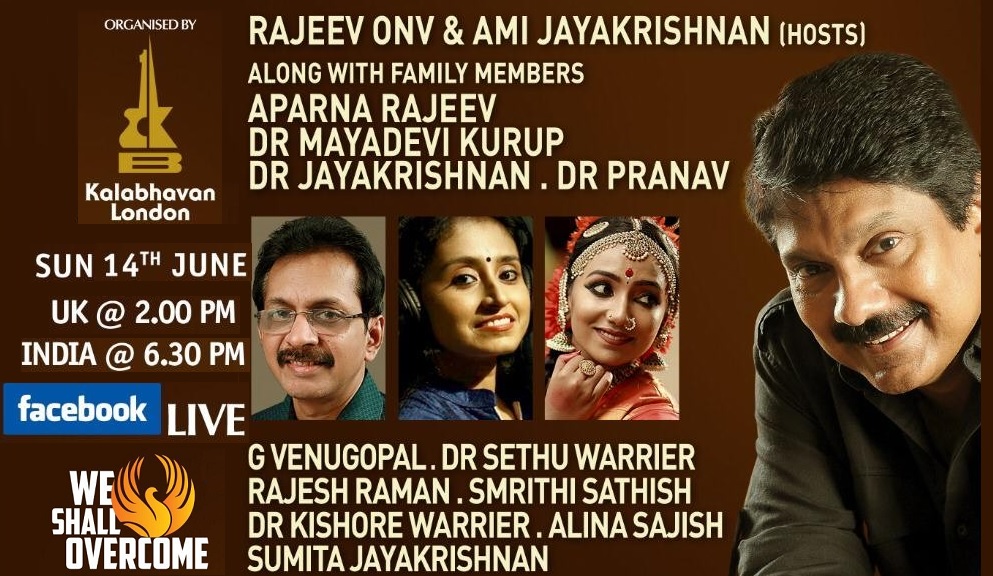 The Facebook Live program, will be held on Sunday 14th June at 2pm and 6.30pm India time. It is titled “Smrithikalilennum ONV”, is a tribute to the legendary poet, lyricist and writer.

Raymol Nidhiry will be the event coordinator for this programme, which also happens to be the first time the Facebook Live is broadcast from different locations involving several singers.

The purpose of Kalabhavan London’s ‘We Shall Overcome’ event is to engage and encourage people through live music, interactive sessions, dance workshops, mental well- being talks etc. Through this campaign, Jaison George and his team are trying to inspire and motivate people positively in their difficult time.

Each day, renowned singers, dancers, and other performers used to come live on Facebook to interact with the people through their performances and talks. The campaign has received a good feedback from the Malayali community in the countries like India, United States of America, Australia, United Arab Emirates, and the United Kingdom. Campaign do have regular audience now and they are supporting to continue this initiative. This campaign is conducted through Facebook Live Shows.

At least one show will be held daily, some days its two and the campaign has completed 60 days, conducted more than 80 Live shows with more than 100 artists across the world. A big team is working under Kalabhavan London for this campaign with Jaison George, Cochin Kalabhavan Secretary and famous artist K.S. Prasad, Raymol Nidhiry, Deepa Nair, Ashok Govind etc. and the support of many well-wishers. Also, UUKMA (Union of UK Malayalee Associations) is giving a tremendous support.

Jaison George hails from Vaikom, Kottayam. He works within the IT department of Cardinal Humes Academy, Westminster London, also the Director of Kalabhavan, London (franchise of Cochin Kalabhavan).

Within this time, the movement has acclaimed popularity among the Malayalees in different countries.