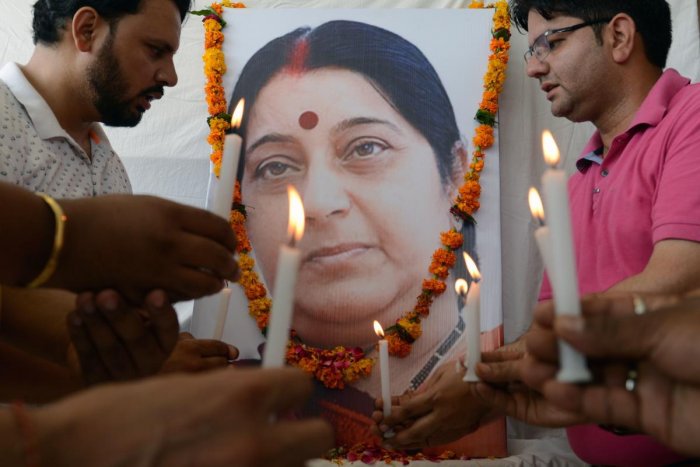 Swaraj, a prominent member of the pro-Hindu Bharatiya Janata Party (BJP), died on Aug. 6 following a heart attack. She was 67.

“She brought a human touch to all decisions of the ministry. As foreign minister, she was our best ambassador and projected a great image of the country in international circles,” said Cardinal Oswald Gracias, president of the Indian bishops’ conference.

Swaraj headed the foreign ministry during the first term (May 2014 to May 2019) of Prime Minister Narendra Modi. An acute diabetic, she underwent a kidney transplant in 2016. She later moved away from active politics and was not part of the cabinet.

Swaraj was part of the federal cabinet and health minister the last time the BJP led the government under PM Atal Bihari Vajpayee between 1998 and 2004.

Cardinal Gracias recalled “with gratitude her interest and assistance for the release” of Salesian Father Thomas Uzhunnalil, who was held captive by suspected Islamic terrorists in Yemen for 18 months.

Father Uzhunnalil was released in September 2017 after he was abducted during an attack on a care home run by the Missionaries of Charity in Aden on March 4, 2016.

Swaraj worked very hard for the priest’s release, said Bishop Theodore Mascarenhas, who was secretary-general of the bishops’ conference at the time.

“She gave a human face to the ministry,” by attending to people’s concerns and communicated even through social media, he told ucanews.com.

She went out of her way to help Indians stranded abroad come home and even help people having problems with travel documents. “She had a motherly way to attend to issues,” the bishop said.

In December 2016, Swaraj was listed among 100 leading global thinkers for 2016 by international magazine Foreign Policy for “fashioning a novel brand of Twitter diplomacy.”

The government and Swaraj also played a part in securing freedom for Jesuit Father Alexis Prem Kumar, who was abducted by suspected Taliban militants in Afghanistan, BJP leaders recalled.

The priest was abducted in Herat province in western Afghanistan by unidentified gunmen on June 2, 2014. He was released on Feb. 22, 2015.

“The matter of his release has been pursued by Indian leadership, including at the highest levels by Prime Minister Modi and minister Swaraj,” a ministry of external affairs official said in 2015.

Bishop Mascarenhas said Swaraj had “special concern for the Christian community. She loved the Catholic Church. She was hurt whenever the Church was hurt.”

The bishop recalled her personal interest in the official Indian delegation visiting the Vatican for the canonization of Mother Teresa on Sept. 4, 2016. “She marveled at the solemnity of the ceremony and the silence of the thousands gathered for it,” he said.

Cardinal Gracias recalled that Swaraj had “a special devotion” for Mother Teresa and she also met Pope Francis following the canonization ceremony. “The Holy Father later remarked, ‘The Indian foreign minister is a very spiritual person,’” he said.

She “was loved by the Syro-Malabar Church because of her critical diplomatic intervention to solve several issues involving migrants, including the safe return of scores of Kerala nurses stranded in Iraq,” he said.