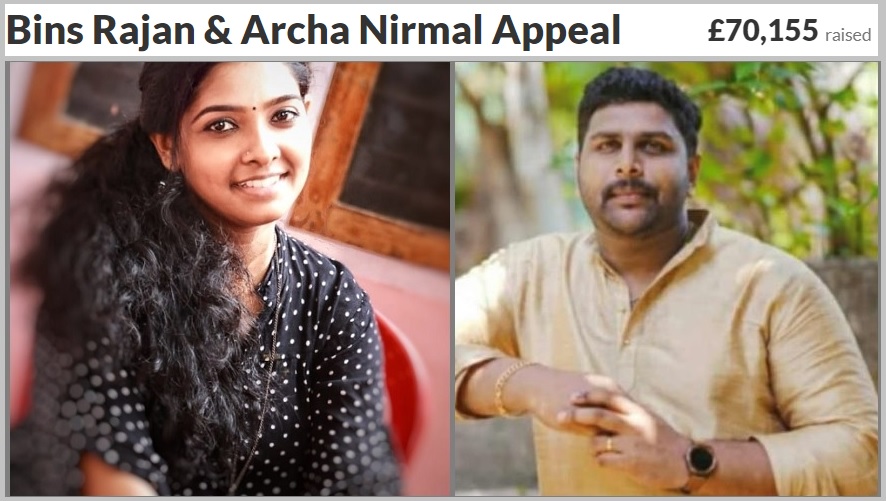 LONDON Jan 22: Two young Keralite families who arrived in the UK in recent years were caught up in a life changing scenario when each of them lost their dear ones following their car crashing into a lorry on Monday 17th January 2022.

They came to the UK with high aspirations to set up their future but fate played truant and two young lives have been plucked away so early with one baby battling for life.

The two Keralite families travelling in a car were Bins Rajan, his wife Anakha and their one year old baby and the other couple was Archa Nirmal and her husband Nirmal. Bins Rajan, who had been driving the car, died at the scene. Police confirmed that Archa Nirmal later died in hospital later that evening.

Three other passengers from the car – including the one-year-old baby – were taken to John Radcliffe Hospital in Oxford and Southmead Hospital in Bristol. Police say the baby remains in a stable condition and Anakha’s condition improved.

Two Malayalee organisations in the UK, Luton Keralites Association (LUKA) along with Union of UK Malayalee Associations (UUKMA) are jointly supporting the bereaving family and liaising with relatives back in Kerala

The two organisations decided to raise funds for the deceased body to be repatriated and offer whatever is left for the two families as a solace in such distressing times.

A Gofundme fund raising campaign has seen unprecedented show of love and gratitude by community members with £10,000 being collected within one hour and followed with a huge increase in numbers coming forward to help any little they can to support these two families.

With a collection of £70,000 within three days, it is a record-breaking feat in the history of UK Malayalees.

It is one of the rare moments in UK Malayalee history that such a huge contribution is made by the community within a span of three days.

These youngsters came to set up their life. They couldn’t. But the Keralite community in UK showered their love and respect through whatever little they could offer.

“Once the funds received it will be used for the repatriation expenses of the two deceased to their home land Kerala, India. Remaining funds will be given to the next of kins of the deceased in equal halves for the welfare of families of the deceased”, the president of the association, said.

He thanked people for their kind generosity.