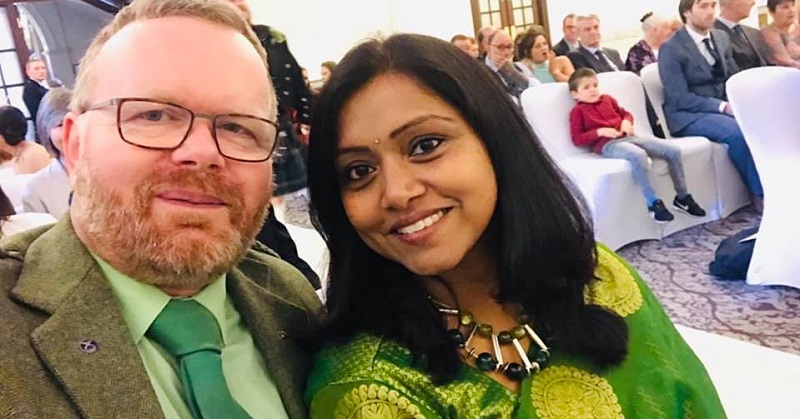 Nidhin Chand, a Malayalee, was one of around 2,000 of the victims who decided to stay back and fight

LONDON April 28: The Home Office had wrongly curtailed visa of around 34,000 international students after a BBC Panorama documentary in 2014 claimed to have uncovered fraudulent activity at an East London school involving overseas students sitting the TOEIC. However, it was later revealed that the blame rested with the flawed computer system of a US company, ETS.

According to various media reports 34,000 students were accused, many were deported or forced out of UK, many who stayed behind to fight their cause in UK court. Following several legal arguments, the Court of Appeals ruled that those accused of cheating in a 2014 investigation into two ETS test centres have the right to challenge the original ruling from within the UK.

However, now the government watchdog, National Audit Office (NAO), has launched an investigation into the Home Office’s decision to accuse about 34,000 international students of cheating in English language tests, and will scrutinise the thinking behind the subsequent cancellation or curtailment of their visas, The Guardian newspaper reported.

Already more than 1,000 students have been removed from the UK as a result of the accusation and hundreds have spent time in detention, but large numbers of students say they were wrongly accused. Over 300 cases are pending in the court of appeal as hundreds attempt to clear their names.

The National Audit Office (NAO) has been making preliminary inquiries into the government’s handling of the issue since the beginning of the year, and has now announced that it will proceed with a formal investigation. The body is expected to report its findings in late May or June.

MPs have warned that this immigration scandal could be “bigger than Windrush”.

“In 2014, a BBC Panorama documentary drew attention to fraud in the UK student visa system, including widespread cheating in English language tests. The Home Office revoked student visas where there was evidence of cheating, but its decisions have come under renewed public and parliamentary scrutiny in the wake of the Windrush scandal,” the NAO said. “The NAO is looking at the information held by the Home Office on the number of people alleged to have cheated and the action the Home Office has taken to date.”

Undercover filming by the BBC in 2014 showed clear evidence of cheating in two test centres where international students sat the test of English for international communication (Toeic). Reporters showed the footage to Theresa May, then home secretary, who said she was shocked, and promised to take action. The Home Office concluded that around 34,000 of the 58,458 students who had taken the test between 2011 and 2014 had definitely cheated, that a further 22,600 had “questionable results”, and that only 2,000 had definitely not cheated.

Campaigners have questioned whether it is plausible that such a large proportion of students sitting a Home Office-approved test could have been involved in cheating.

Stephen Timms, the Labour MP for East Ham, who represents a number of affected students and who has been campaigning on this issue, said: “I welcome the NAO’s decision to investigate the Toeic scandal on behalf of parliament. I hope we might finally find out why so many innocent students have been treated so disgracefully.”

A Home Office spokesperson said: “We have been supporting the National Audit Office in its work on this investigation since the start of the year. We will consider the findings of the report once it is published.”

Last year the NAO published a critical report on the Home Office’s handling of the Windrush scandal, highlighting poor-quality data that wrongly classified people as illegal immigrants, the risky use of deportation targets, poor value for money offered by hostile environment policies, and a failure to respond to numerous warnings that the policies would hurt people living in the UK legally.