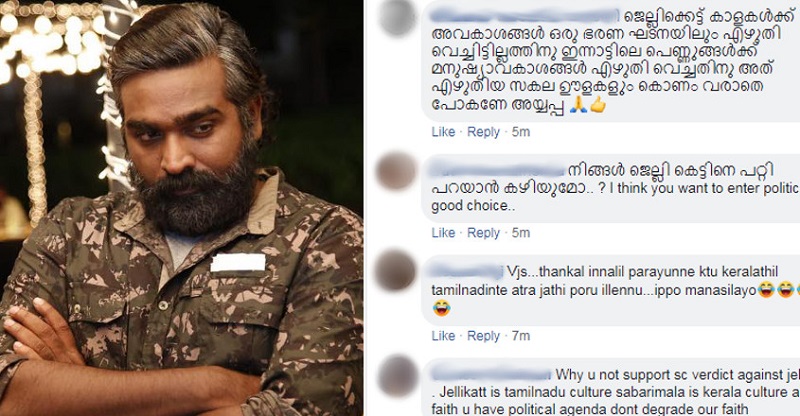 KOCHI Feb 4: Tamil super star Vijay Sethupathi, who was in Kerala’s Alappuzha district recently for a shoot, said he is a “big fan” of Kerala Chief Minister Pinarayi Vijayan. The actor also hailed the CPI-M leader for the way he handled the Sabarimala issue.

His comments on Sabarimala have irked a section of the crowd that has called for a complete boycott of the actor’s movies. They also asked why the actor refused to speak up on the Jallikkattu issue. His Facebook page is now being posted with protests by Keralites who are against entry of woman in Savarimala.

Sharing the experience of having shared stage with Pinarayi Vijayan once during a television show, Vijay Sethupathi said the Kerala CM is a mature person who is always “cool.” He recollected the CM’s “headmaster like” entry to the stage.

“There was pin-drop silence when everyone saw him walking in,” Vijay said.

“He overheard me saying that my flight leaves at 10 and asked me why don’t I speak first. I was surprised.  I wonder even an MLA or MP would be co-operative like that,” the 96-star said.

“Tamil Nadu was hit by Cyclone Gaja when Kerala was dealing with the consequences of the floods. Still, his government contributed Rs 10 crore to the relief funds. I will be always grateful for that,” he added.

The superstar questioned the validity of the argument that portrays women”impure” because of the menstrual cycle and also commented on the controversies surrounding the Sabarimala temple.

“The Chief Minister is right on the Sabarimala issue. I don’t understand why there is so much ruckus about it.

Women have to bear certain pain every month. We all know why it happens it is a holy thing thanks to which we all are here. It is much easier to be a man and people should understand that,” 24 News quoted him as saying.