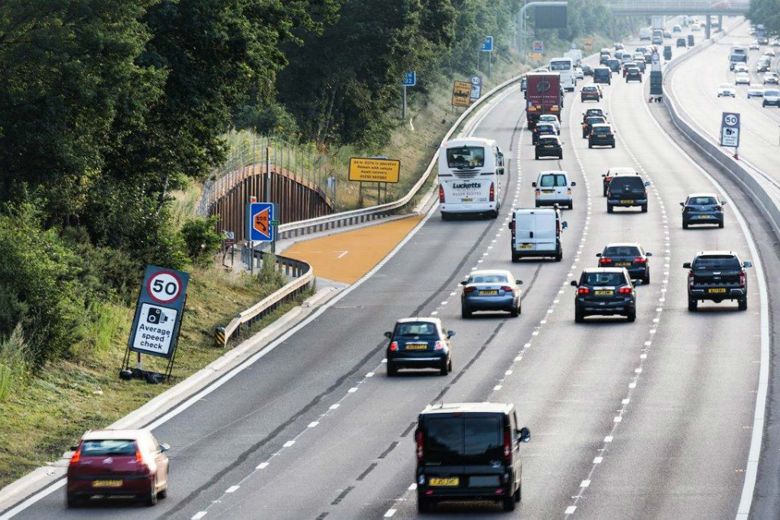 LONDON June 19: New smart motorway driving laws have come into action which if not adhered by, could see fines of up to a £100 and three penalty points.

Motorists can be fined up to £100 and gain three penalty points if they are to drive in a lane closure on a smart motorway. Lane closures are indicated with a ‘Red X’ and if it is indicated above a lane then motorists must not travel in it.

Before the new laws were actioned, drivers would’ve had to have been caught driving in a closed lane to be fined, but with permanent 24/7 cameras, this can send motorists an instant fine.

Currently in the UK smart motorways operate for a range of 416 miles, but this is set to rise to 788 miles in 2025, making smart motorways more common for daily motorists.

Smart motorways eradicate the idea of the hard shoulder and functions in all lanes on a motorway. What is set to be renamed to ‘digital roads’ in the future, has been implemented by the UK government in order to improve the safety of motorists and to ease congestion.

Highways England have published on gov.uk a guidance on ‘how to drive on a smart motorway’ which entails quick tips on how one should drive safely and legally on England’s smart motorways. Some examples of these have been provided below:

 Never drive in a lane closed by a Red X

 A hard shoulder is always identified by a solid white unbroken line – if there’s no speed limit displayed above it or a Red X is displayed, do not use it except in emergency.

 If your vehicle experiences difficulties, e.g. warning light, exit the motorway immediately, if you can.

 If you break down, put your hazard lights on.

 Most breakdowns are preventable – keep your car well maintained, check your tyres and make sure you have enough fuel for your journey.

The growth of technology has allowed for Highways England’s motorway network to monitor and manage the flow of traffic. It allows for traffic to run smoothly and can help control centres alter or activate signs according to what is happening on the motorway.

AA research has shown that “one in twenty drivers continue to drive in red X lanes, even when they’ve seen it and, so far, Highways England have written warning letters to over 180,000 drivers about their actions”.

Now that there is immediate action put in place for drivers that may be breaking the law, this should see a reduction in those that travel in a closed lane and eliminates the risk of accidents or other horrific consequences.

From 10 June, the law changed so that police can use cameras to automatically catch drivers breaking the rules – hitting them with a £100 fine and three penalty points. However, Highways England says that the new cameras won’t be operational until later in the summer.

To find out more about the new laws, visit
https://www.gov.uk/guidance/how-to-drive-on-a-smart-motorway