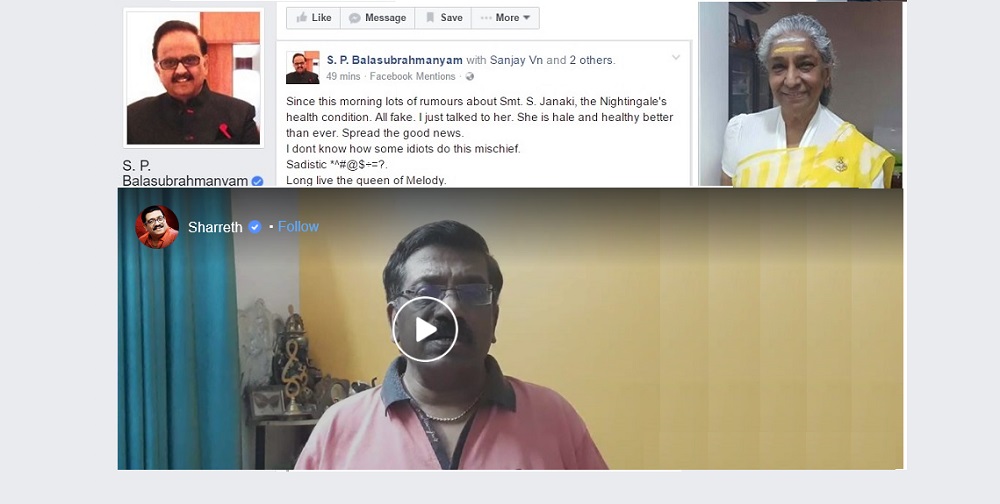 CHENNAI June 28: Noted south Indian music director Sharreth and legendary singer SP Balasubrahmaniyam has come out and condemned those who have been spreading fake news on social media about the death of legendary singer S. Janaki the nightingale of South Indian cinema.

Sharreth was shocked to hear the news and he rang the noted singer’s son Murali Krishna who clarified that she underwent surgery and is recovering from it and is very much fine now.

Sharreth was also shocked to learn that the news spread like wildfire and the news even reached noted singer KS Chithra who was in tears and the same with SP Balasubramaniam who too found such fake rumour mongers as disgrace.

In 2016, there was another similar fake news which resulted in noted south Indian singer SP Balasubramamian taking onto his Facebook to clear the air.

In 2018, the DGP of Kerala had ordered a probe into the fake message circulated in the social media which said that noted singer S Janaki had passed away. The action follows a complaint submitted by the association representing playback singers SAMAM.

Sharreth and SPB were disturbed by such rumour-mongers and termed them as sadists. Watch the videos.