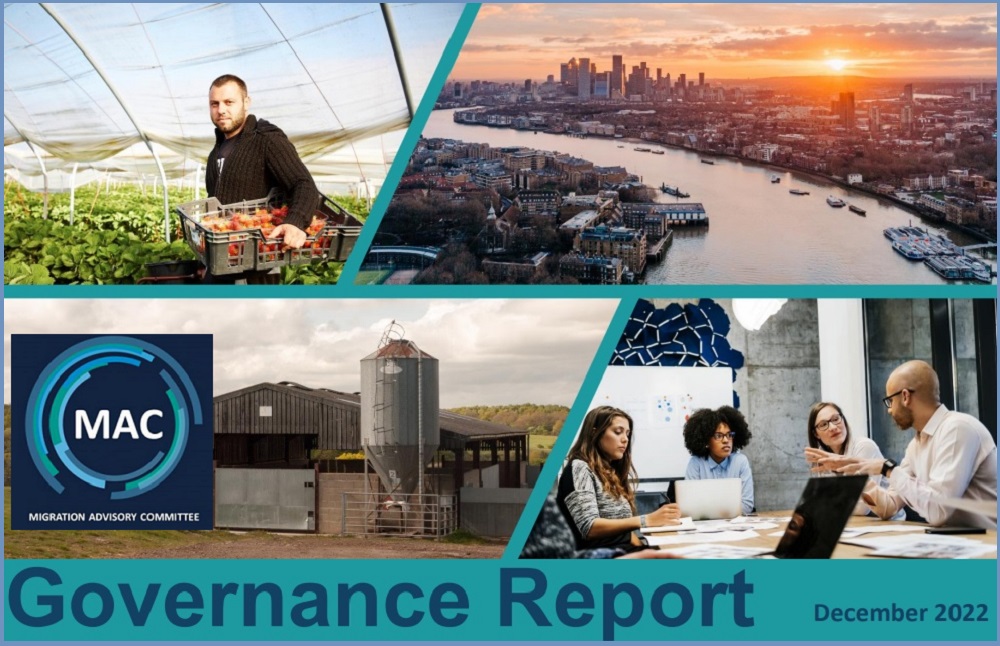 LONDON Dec 14: The Migration Advisory Committee report published yesterday has urged the UK government not to reduce the numbers coming to the UK as it will stifle the labour market. The MAC, which provides guidance to the Home Office, has asked the UK government to work with the private sector and work out options to address the labour shortages. The Home Office said it would consider the report’s findings carefully.

The MAC report acknowledges that there has also been a significant rise in the number of international students coming to the UK. According to the report the vast majority will leave the UK after their studies are ended, most of the rise in net migration is likely to be temporary.

“The MAC has also previously highlighted the very substantial benefits that international students bring to the UK. In addition, the work routes have been deliberately designed to be flexible in terms of numbers depending on the state of the economy. When the labour market is tight, as it has been in recent months, we would expect employers to be recruiting more from overseas to address shortages. If, as predicted, the labour market weakens in coming months, we would expect a reduction in worker visa applications. We would caution the Government in becoming too focused on particular net migration numbers, and any change in objective would need to be consistent with the fiscal rules that the Government have in place”.

The Migration Advisory Committe had said that the government’s potential plan to clamp down on international students taking “low-quality” degrees could “send many universities over the edge”, particularly in poorer regions. The report said international students provide benefits “to local economies, to the public finances and in cross-subsiding research and the education of domestic students”. It said that applications for undergraduate study from the EU had fallen since Brexit, while applications from outside the EU have risen. “There has been a very substantial rise in the number of dependants arriving with international students and it seems only right that the government reviews the rules governing that,” it said.

According to reports speculation is mounting that the UK will introduce a surcharge for visas granted to dependants of sponsored study visa holders.

The MAC, which is tasked with advising the government on immigration, said the design and poor policing of existing visa schemes had left migrants open to abuse. The committee pointed to evidence that many migrants were going into debt to pay fees charged by recruiters in their home country, or to meet the costs of moving to the UK, including the high visa charges levied by the British government, with some becoming trapped in debt bondage as a result. 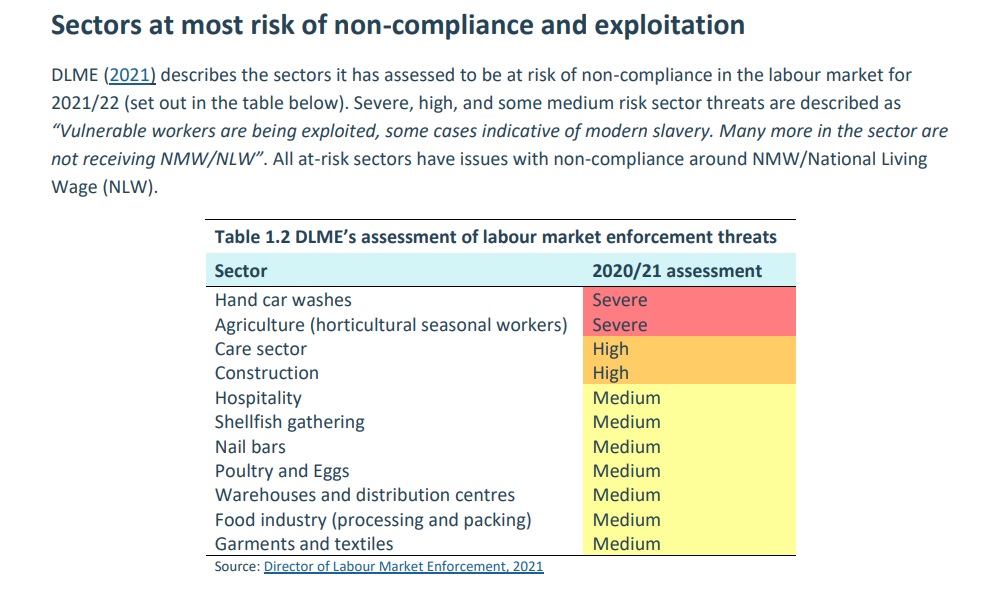 The report summarised as below and asked the government to be catious and reiterated the thinking behind what lead to opening up migration as per the government policy.

“The Skilled Worker route replaced the Tier 2 (General) route as the main work route for skilled work into the UK in December 2020. With migrant inflows tempered by the pandemic in 2021 and care workers made eligible for the route in February following the MAC’s recommendation, it remains to be seen what long-term volumes will be on the new route. More broadly, net migration has risen considerably in the year ending June 2022, to 504,000. This is the highest figure since records began but follows 2 years in which net migration was lower than in recent years. This rise in the most recent 12 months is for several reasons, including the new Hong Kong British National (Overseas) (BNO) route and Ukraine Sponsorship Scheme, a rebound in worker visas from the pandemic, a rise in the number of students and their dependants, and the NHS’s use of the SW route. 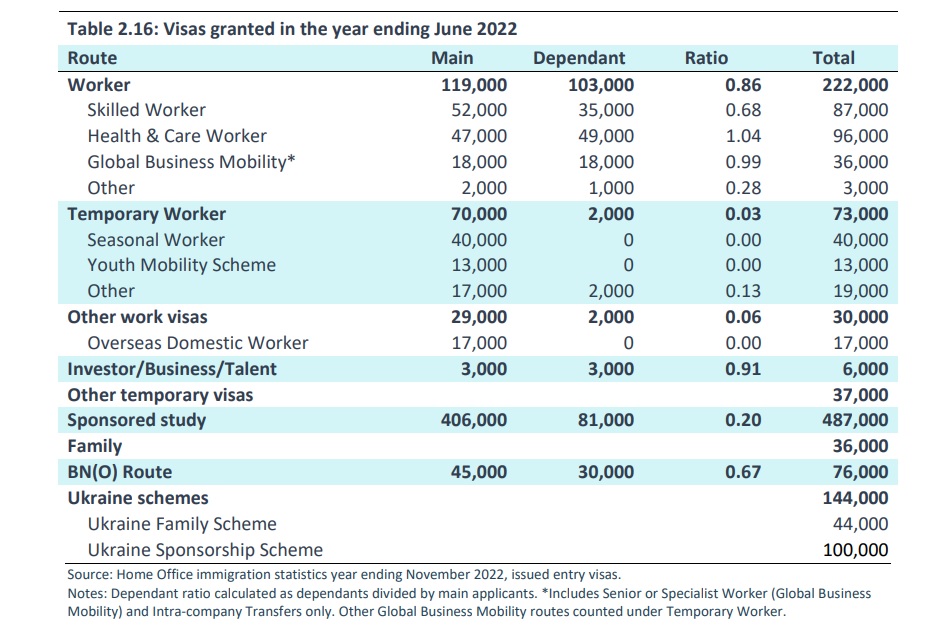 It is unlikely that net migration will remain this high in the long term: the spikes in migration caused by the new visa schemes are likely to be followed by applications tapering off and gradual outflows. In addition, the work routes have been deliberately designed to be flexible in terms of numbers depending on the state of the economy. Given the high level of vacancies referenced earlier in the chapter, it is unsurprising that employers are increasing recruitment overseas to address shortages. If, as predicted, the labour market weakens in coming months, we would expect a reduction in worker visa applications. We would caution the Government in becoming too focused on net migration numbers, particularly since a significant part of the rise is a result of deliberate government policy”

Ensuring migrants can switch employers
The report also said that recent MAC commissions have resulted in several recommendations made with exploitation in mind. These include recommendations aimed at ensuring migrants can switch employers and that live-in workers in the social care system should be sponsored by an umbrella body rather than by individuals.

The shortage occupation list was something that the government requested the Committee to review in August 2022. However, this report is on hold “pending clarification from the Government on migration policy”.

The MAC report wrote “In August 2022 we received a formal Home Office commission to review the SOL. This review is currently on hold at the request of the Home Office pending clarification from the Government on migration policy. This may alter the specific details of the commission and we do not think it would be in the interest of stakeholders to begin a Call for Evidence that may not reflect the final parameters of the commission. We will continue to press the Government to reach a decision on this commission as soon as possible

A rural visa to address depopulation
The Committee commented on the rural visa pilot to incentivise movement into more rural or underdeveloped areas in the UK.

The report explained about the rural visa project. “Following research by its EAGMP, the Scottish Government developed a Rural Visa Pilot Proposal which was sent to the Home Office and the MAC in September of this year. We believe that this pilot proposal is sensible and clear in both scale and deliverability, and that the UK Government should consider what action would be required to take a pilot from proposal stage to implementation. Ultimately, we believe it is in the interest of the UK Government to pilot and evaluate a rural visa targeted at areas facing depopulation and that such a pilot would align with the Government’s commitment to level up all parts of the UK.