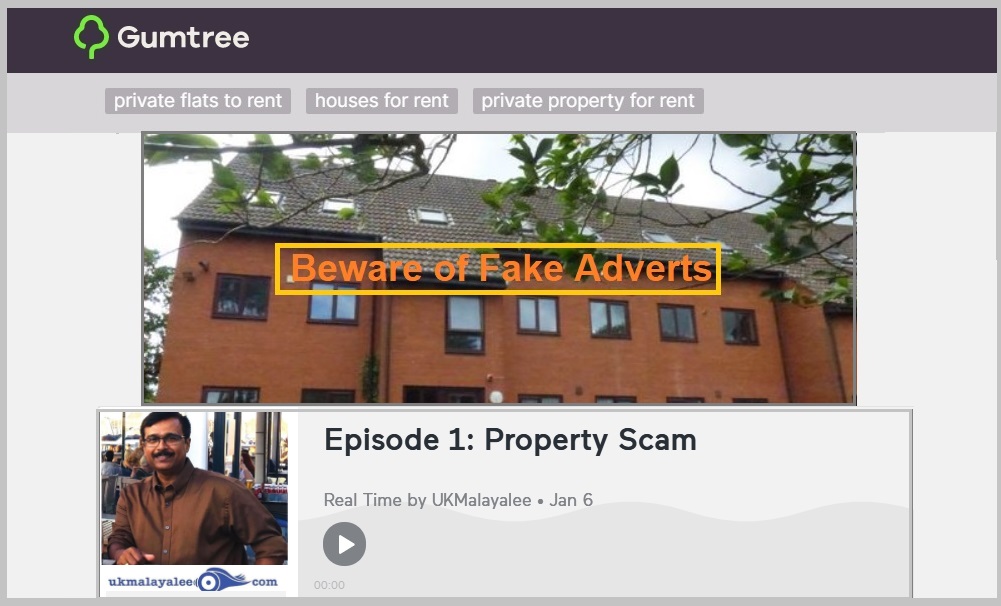 BRISTOL Jan 7: A Keralite student has been cheated by a Gumtree advertiser by showing her a flat which he said it was his. The student found details of the landlord who advertised the One Bed property at Tanners Court Bristol Road Frenchlay Bristol on Gumtree and made contacts with the so-called landlord on his phone.

A couple of days later the student received a Text message asking her to arrive for a viewing at the flat. During the viewing the landlord agreed to offer the flat to the student and thus he asked for a deposit to be put in place so that he doesn’t have to show anyone else and thus she transferred a deposit of £350 to the landlord’s account straightaway.

The student asked for the deposit of £350 to be returned and the landlord said that he cannot transfer it then and there and said that the student will receive it the next day. However, thereafter, all calls to the landlord’s number went unheeded. The student has approached her bank and also reported the matter to the bank where she transferred the money (Hallifax). But they are unable to help as the transfer was already done.

This website too tried to make contacts with the landlord but all calls and text messages were not replied to. This website is still pursuing to get the money back for the student.

Fake landlords are a problem in the UK

Fake properties are often listed on Gumtree, SpareRoom or other similar websites, particularly in areas with high demand for rental homes. Prospective tenants are then convinced to transfer a deposit or an advance rental payment – anything from £500 to £1,600 – to ‘hold the property’.

In some cases, tenants even visit the property in person and are shown around by someone claiming to be the landlord before being asked to transfer a holding deposit.

A few weeks later, with no further contact being made, the tenants realise they have been the victim of a scam.

As well as fake listings and scammers advertising properties that are already rented out, the most common cases of rental fraud concern ‘phantom flats’ – cheap properties advertised in prime locations that either don’t exist or are owned by someone else.

Property rental sites such as Rightmove are also used by fraudsters to convince tenants to hand over money – straight into the bank account of the ‘landlord’ – before a viewing, again working on the proviso that the home will be ‘secured’. Concerns about high demand, the need to act decisively and fierce competition for rental homes are preyed on by the perpetrators.