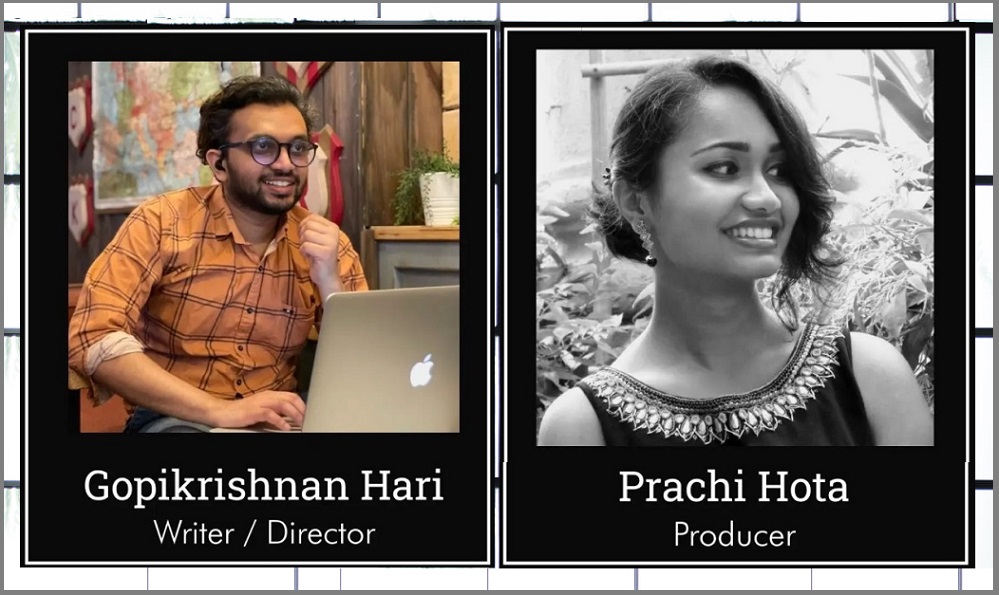 LONDON March 14: Gopikrishnan Hari and Prachi Hota are students of MA Filmmaking at London Film School in London. As their course is nearing its completion, the duo, as part graduation project, are planning a film. However, things are not so easy for them to bring their project to a fruition. They have now embarked on a Crowdfunding Campaign to jump-start their careers.

The short-film titled ‘Aaja Re’, is written and directed by Gopikrishnan Hari from Kerala and produced by Prachi Hota from Odisha. The upcoming thriller is planned to be shot in London in April 2022.

The film unfolds the story of Raag, an Indian immigrant in London who is being followed by an apparition. Is she, the spectre of his past, or a visitation from his future? For us to find out we need to make this film come true.

Gopikrishnan Hari is currently a student of MA Filmmaking at London Film School. He is a graduate of the National Institute of Design, India in Graphic Design and a trained theatre actor. He has written, directed and edited films that made it to international film festivals and has published short stories and visual design works. After a couple of stage productions as an actor and a year as a co-lead in Media Marketing in India, Gopikrishnan moved to London to pursue his Masters in Filmmaking. Having more than seven years of experience in film editing and graphic design, he has worked as an editor in short films, corporate videos, social media ads and aims to pursue a career as a film director, editor and actor.

Prachi Hota is an award winning Indian classical dancer, writer and filmmaker with a special interest in socio-cultural issues. With over two decades of training as a dancer. Prachi enjoys directing actors because she loves telling stories through the human body. Prachi runs a blog, has written for several magazines and online newsletters in India, and has taken several initiatives towards the protection of India’s intangible cultural heritage and safeguarding the rights and livelihood of practitioners of Indian art and craft traditions. She has written scripts for short films, corporate videos and advertisements, in addition to producing a wide variety of films, ranging from dramas to sports documentaries, in her time at the London Film School.

The duo’s campaign’s initial goal will be to raise £8,000 through Indiegogo. If they get or surpass their goal, they will bring in stretch goals, which will come with their own set of perks

The duo assures that as its their graduation film and a calling card for the creative team to jump-start their careers they will work extremely hard to make this the best film they can. They are also receiving help from some of the best in the industry who also happen to be their tutors. They have a DOP who is a graduate of London Film School, who currently works with top industry professionals in India and Britain.

If you liked the campaign and have faith in them, please spread the word and help as much you can by following the below links