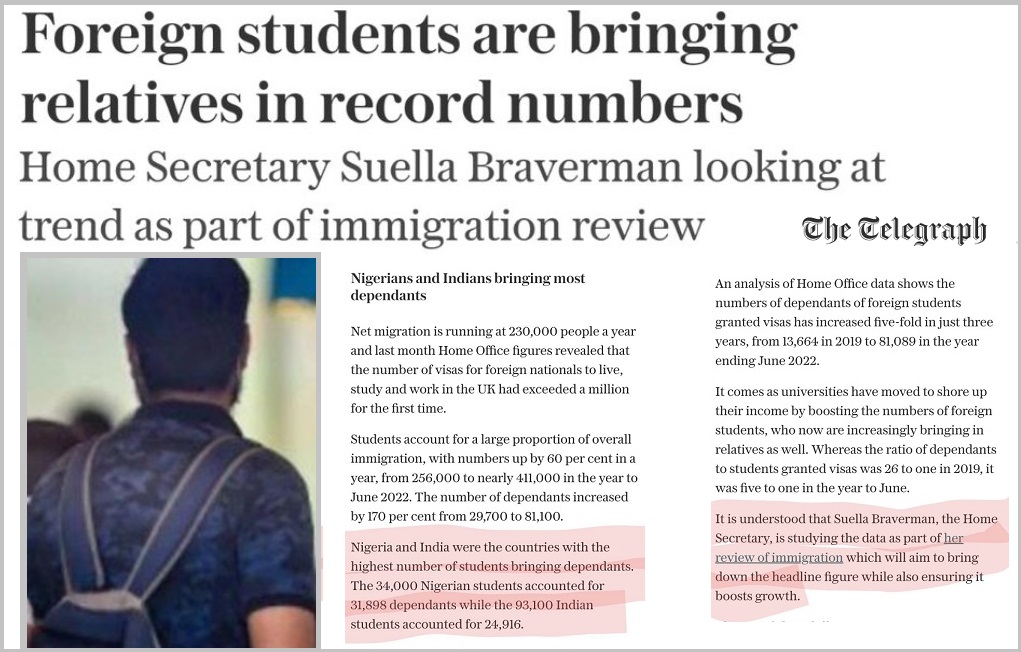 LONDON Sept 28: An analysis of Home Office data shows the numbers of dependants of foreign students granted visas has increased five-fold in just three years, from 13,664 in 2019 to 81,089 in the year ending June 2022, The Telegraph reported.

It comes as universities have moved to shore up their income by boosting the numbers of foreign students, who now are increasingly bringing in relatives as well. Whereas the ratio of dependants to students granted visas was 26 to one in 2019, it was five to one in the year to June.

According to The Telegraph report, it is understood that Suella Braverman, the Home Secretary, is studying the data as part of her review of immigration which will aim to bring down the headline figure while also ensuring it boosts growth.

Those with low skills could fall foul of moves to ensure that migrants seeking visas demonstrate they would have a meaningful impact on economic growth by increasing GDP per capita.

Nigerians and Indians bringing most dependants

Net migration is running at 230,000 people a year and last month Home Office figures revealed that the number of visas for foreign nationals to live, study and work in the UK had exceeded a million for the first time.

‘An area in desperate need of tightening’

Alp Mehmet, chairman of Migration Watch UK, said: “It has been clear for years that a significant number of those coming to study and their dependants use it as a route into work and settlement.

“It is yet another mode of uncontrolled and uncapped migration, often, feeding the demand for low-skilled and low-paid workers. The number of student dependants has spiralled to over 80,000 in one year. It is an area in desperate need of tightening.”

The immigration review is to consider overhauling the visa system to address labour shortages, attract talent and improve economic growth.

It could see changes to the shortage occupations list to allow some key sectors to recruit more overseas staff and a loosening of the requirement to speak English in some areas to enable more foreign workers into the country. The current 30-40,000 cap on seasonal workers is likely be lifted in the “short term.”

Downing Street says the Government is not advocating an increase in immigration but changes to the mix. “That will involve increasing numbers in some areas and decreasing in others. As the Prime Minister has made clear, we also want to see people who are economically inactive get back into work,” they said.

Across work visas, the number and ratio of dependants has also increased, nearly doubling in a year from 55,747 to 109,649. The ratio for the 221,584 visas granted for skilled workers in relation to dependants was 2.5. – The Telegraph