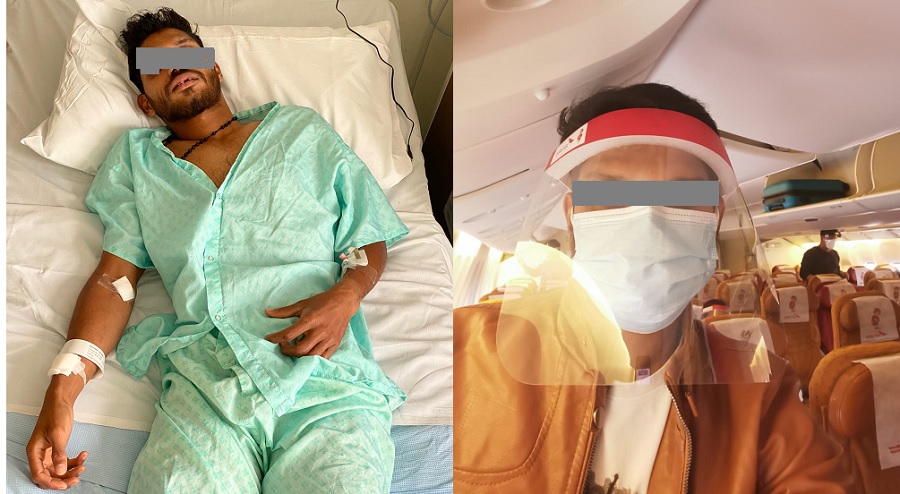 After ending up in hospital, Thomas found life very hard, as he had no proper official documents and no means of support to survive on his own with the life changing injuries he suffered following the attack. He did not have anyone who had initially supported him to arrive in the UK. They all slowly withdrew even from any initial phone calls they made to enquire about his wellbeing.

He returns home bruised and battered a very broken young man who came to the UK to make a life on his own.

Speaking to this website from Haeathrow airport a very dejected Thomas said: “I know I am a failure. I have failed my parents and siblings back home. I was their hope and now I am returning with empty hands. Thanks to Jaya chechi (name changed) for helping me a lot. If it was not Jaya chechi I don’t know what I would have done”.

Good Samaritan Jaya came to the rescue of Thomas who was left on his own to deal with his matters because of his illegal entry into the UK with no one to take ownership and with the agents backing out by not offering him any help.

Finally Jaya was also able to get back Thomas’ Indian passport which was confiscated following him seeking asylum and he returned home using the Voluntary Returns Service, a scheme which allows those who are here without passport or sought asylum or overstayed to return home.

Following the news of Thomas’ situation his mother back home got hospitalised for anxiety and trauma and they all wished for his safe return home. Thomas was emotionally and psychologically traumatised and going home was his final decision.

A group of friends who have been helping Thomas to overcome the peril raised a small fund for Thomas to travel back home to his beloved mother and the rest of the family members.

Thomas landed at LHR on 23rd March on a Seaman’s visa. His passport was confiscated by the Immigration Authorities and he was allowed to enter the UK on an asylum application. He was informed at the airport that the company that provided work permit was non-existent and therefore he was a victim of human trafficking.

His agents in Kerala sent him an address where he could get temporary accommodation, for half a month and he lived there since 24th March by paying rent. In the meantime, he managed to obtain a cash-in-hand job within two days and tried to make a living as he had a family to fend for back in Kerala.

On the evening of 5th April, he was approached by a group demanding money on his way home. He said he had no money with him. Minutes later he was pushed from behind with immense force as he got hit at the back of my head. Thomas earlier had stated to this website that it was a racist attack and narrated the incidents. But due to the nature of the attack to his head Thomas was unable to recollect it all proper and therefore we did not make any further efforts for him to explain that evening when he got attacked.

He found him lying by the alleyway with his phone and wallet missing when he opened his eyes next day morning. He cried out for help, somehow pulled himself up and struggled to walk home. His landlord did not want to get involved with the police, therefore he dropped him at Ealing Hospital the morning after.

He was unable to recollect what happened to him when he was in hospital, but he managed to figure out from the doctors that he had a blood clot inside his head which is affecting his memory.

He remained in the hospital until he got discharged on 14/04/2021 without further treatment from the NHS. He was asked not to return to his previous accommodation by his landlord.

Being in severe pain, losing his memory he was unable to walk or talk to anyone.

With help from a Keralite he got a cab to the hospital due to the deteriorating physical condition. The cab dropped him at Hillingdon hospital, the nearest one to LHR and he started receiving proper care and treatment for his medical needs.

While being in hospital Jaya liaised with all those who could offer some form of support. She finally obtained his Indian passport from the relevant authorities and also managed to buy his air tickets food and travel money for him to return home.

Thomas was extremely shaken and suffered severe trauma following the attack. Having no means to survive in the UK, he finally returned to Kerala yesterday to join his family for the sake of his physical and psychological wellbeing.

His final words to anyone who was trying to come to the UK on an illegal route would be “Please don’t do it. It is not worth the risk. You need all legal documents to set up your life. You will worry for rest of your life about getting caught and also survival each day is like a secondary citizen. I am only 27 and I could have opted for several other means to make up my life and not this illegal route. Please think twice before you embark on such a venture”, Thomas bid adieu.