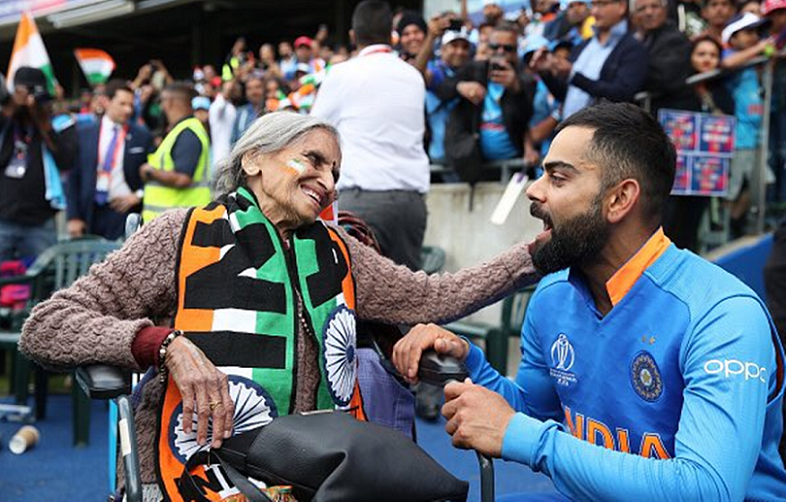 LONDON July 3: Virat Kohli, India’s captain, was seen having a conversation with Charulata Patel, the 87-year-old Indian fan, after beating Bangladesh by 28 runs in a World Cup 2019 match at Edgbaston on Tuesday.

Virat Kohli then took to Twitter to share pictures with the elderly Indian fan. “Also would like to thank all our fans for all the love & support & especially Charulata Patel ji.

She’s 87 and probably one of the most passionate & dedicated fans I’ve ever seen. Age is just a number, passion takes you leaps & bounds. With her blessings, on to the next one,” Virat wrote in his tweet.

After India’s victory in Birmingham, Virat had a chat with the elderly fan.
Speaking to ANI, she told that she has been watching cricket for last many decades.

She also added that she was there in 1983, when India won the World Cup for the first time under the captaincy of Kapil Dev.

“India will win the world cup I am sure. I pray to Lord Ganesha that India wins. I bless the team always. When Kapil paaji won the World Cup in 1983, I was there as well,” she was quoted as saying by ANI.

With the win on Tuesday, India became the second team to book their place in the semi-finals of the World Cup 2019 after Australia. India will next lock horns with Sri Lanka in their next league fixture.