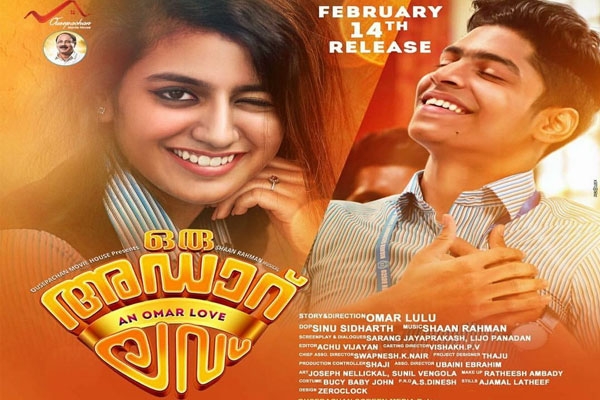 CHENNAI Feb 16: Malayalam movie Oru Adaar Love has found its way to Tamilrockers, the infamous piracy website. Tamilrockers has become a pain for film production houses and distributors throughout the country, and Oru Adaar Love is its latest victim.

Oru Adaar Love is a romantic comedy revolving around three school kids in Kerala. It stars Priya Prakash Varrier and Roshan Abdul Rahoof. A clip from the movie went viral last year on social media. It showed Varrier winking flirtatiously at Roshan during a lecture.

Tamilrockers is the Piratebay of India, and has has a similar reputation in India that Piratebay has in the US. Despite action by law enforcement agencies and even interventions by the courts, Tamilrockers operates with impunity.

Nearly every ISP (internet service provider) has banned it, and yet it continues under different domain names and other people access it using proxy servers.

Some of the more recent victims of Tamilrockers include Ek Ladki Ko Dekha Toh Aisa Laga, Manikarnika: The Queen of Jhansi, The Accidental Prime Minister, Uri: The Surgical Strike, Viswasam and Petta.

Last year, it leaked several big movies like Rajinikanth’s 2.0 and Thugs of Hindostan, possibly causing the loss of crores of rupees to production houses and distributors.