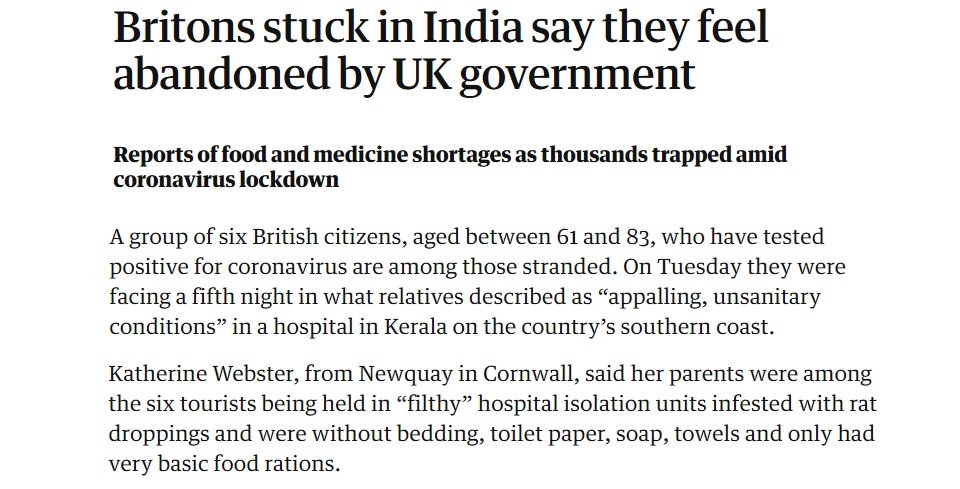 LONDON March 28: A UK based journalist and social activist from Kerala, who has been held up in Kerala due to the Corona Virus outbreak has come out with an open letter to The Guardian newspaper’s editor for publishing an article that tries to take the sheen out of the massive and excellent work that the Indian and Kerala health sectors are taking during the time of the Corona Virus outbreak.

In his Facebook post Rajesh Krishna highlights the methodical and timely measures taken by the Kerala health sector and dismisses the Guardian article as a mere portrayal of a one off incident which they should have avoided taken into consideration the excellent work that Indian nurses, especially from Kerala, are doing within the NHS in the UK.

In response to the article the Kerala government released a video detailing the services offered and the standard of care given to the British nationals.

An open letter to ‘The Guardian’ editor regarding the news on UK nationals stranded in Kerala, India.

This morning, I happened to stumble upon a news in ‘The Guardian’ titled “Britons stuck in India say they feel abandoned by UK government”. I found this an articulate attempt to draw attention to the irresponsibility and negligence of the UK government and their failure to effectively bring back Britons stranded in India following the Coronavirus pandemic. At the same time, the article took me by surprise because of the way it defamed the Indian health system, despite all the acclamation it has garnered in the past several days.

At this juncture, I would like to put some things into perspective. The first Corona case ever confirmed in India was in Kerala, on the 30th of January. As of 25th March, Kerala has 118 confirmed cases with zero deaths, with around 75,000 people under observation and isolation. A day later, on the 31st of January, UK confirmed its first case. As of 25th March, 465 people have lost their lives in the UK.

It was on 8th March that the health officials of Kerala established that two travelers from Italy were positive for Corona virus. They travelled by Qatar airways that landed a week back, with 182 passengers aboard. It took the Kerala health department merely 48 hours to trace the primary and secondary contacts of all the passengers by publishing a route map from the minute they landed in India, promptly isolating around 3000 people.

The Kerala government is in fact an epitome of the most effective governance during a crisis such as this, and it stands out for several reasons.

Our small state government has already announced a package of 2 billion pounds, which will inject to the economy through the hands of the common laborers and daily workers. £200 million has been announced for Kudumbasree, a unique self-driven women empowerment program helping thousands to set up micro credits for productive enterprises in rural areas. £50 goes to ensuring that nobody is starving, opening up restaurants that provide a meal for 20p. It doesn’t end there! Free ration of food and essentials for around 9 million families, two months of pension in advance for all retired labours, moratorium for all bank loans, and much more! According to the Kerala Chief Minister Mr. Pinarayi Vijayan, the state is equipped with supplies for not only 21 days, but profusely for the next three months.

Can you imagine in the wildest of your dreams, anything like this in the UK? An average British citizen lives to pay bills! My wife (who works at NHS UK ) and I are working full time to pay off our mortgage/rent, council tax, vehicle tax and insurance, utility bills, credit card bills, and also save some for groceries at the end of it all.

But if you would be kind enough to take a look at the state government’s operations and some points to ponder:

• We were equipped with a well-drawn plan weeks ahead of this crisis.
• 4516 tests conducted so far, which is 12.1 tests among 100K people, the highest rate of testing in the country
• In addition to around 5000 doctors, State appointed 276 doctors in a day by video conference to tackle the situation.
• 1297 institutions in the government sector with 39511 beds. Additionally, 12 ESI hospitals and about 80 co-operative hospitals which will add further 5000 beds. Another 1500 hospitals are in the private sector with 60000 beds. There are a good number of alternative medical hospitals like Ayurveda and homeopathic hospitals are in government sector.
· Doctor to bed average is 7.5 which is the top in the country. In UK it is 2.8
• In UK patient bed ratio is 2.5
• Out of 75000 isolated people, only less than 500 are in hospital isolation. Rest are under home isolation.
• We are still on plan A, we have a plan B and C in place
• In UK total spending on health last year was 134 BN for 67 Million people
• GDP
• A person contributes £1800 / annum towards health tax.
• In Kerala we are spending almost equal amount for health sector and catering 35 Million people (source, Kerala finance minister’s office)
• Again, as per the finance minister of Kerala, our top disbursements are for Health and education.

That’s why Ex MP Anna Soubry probably said that the nurses from Kerala are the best in the world, and it doesn’t come across as a surprise!

As much as I empathize with the Britons stranded here and recognise their need to reach home, I would also like to mention that things could have be worse. It would be gratifying to see them appreciate these efforts before beginning to criticize so much.

I am sure the Kerala government does not expect praises or words of gratitude, but please consider it a request when I ask you not to degrade or disrespect the health department of Kerala. I was a traveller in the same Emirates flight from which the 19 Britons were deboarded, with two of them sitting right next to me. I decided to deboard and resort to self-quarantine for all these days, as a duty to avoid any further spread. It was disheartening for me to see this news, having been in the same flight, and I couldn’t stop myself from reacting.

In closing, I would like to humbly request Mr. Prime Minister to watch the following video of the Chief Minister addressing the national media on the steps he has taken to ensure safety and security of his people during this treacherous time.

His English might be broken, but his actions are rock solid. Please find the link to another video that has surfaced in the news in Kerala in response to the article in your newspaper.

I sincerely hope that these videos explain the reality of the situation here. As someone claimed, “no rats running around , clean conditions, no patients either and they even have toilet paper”… !!!