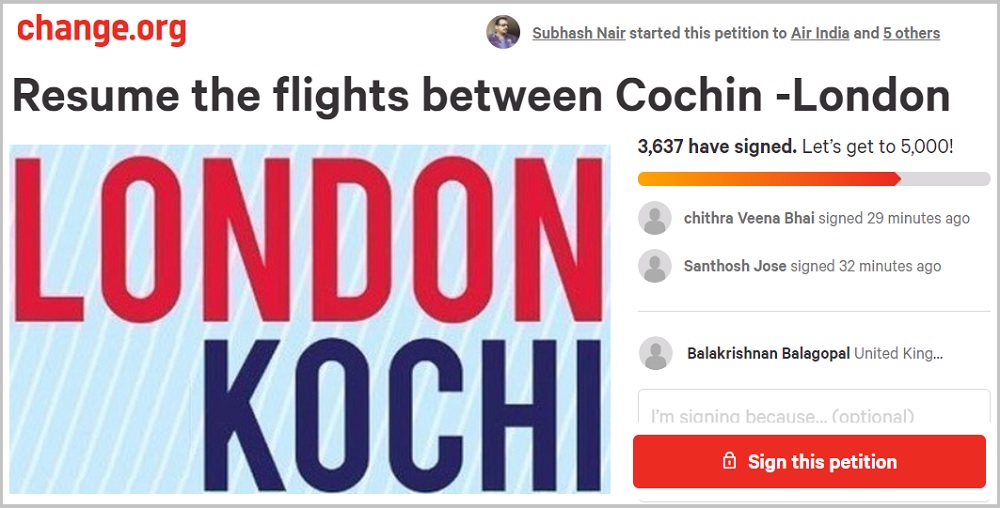 LONDON Jan 4: Keralites in the UK are unhappy with Kochi being removed from list of destinations where international flights can operate between India and UK until 23rd January, 2021.

Following the find of a new variant of Coronavirus international flight operations were stalled until 8th January 2021. However, later the India government decided to operate 15 flights per week between India and UK by following stringent protocols from 8th January.

In a Tweet the Aviation Minister Hardeep Singh Puri said: “Operations till 23 Jan will be restricted to 15 flights per week each for carriers of the two countries to & from Delhi, Mumbai, Bengaluru & Hyderabad only.

Keralites in UK are unhappy that Kochi was not in the list announced by the minister. Malayalee organisations in the UK have started to liaise with government authorities. The general consensus among Keralites in UK is to ensure that they reinstate the direct flight between UK and Kochi and this could be done only if there is a joint effort from various organisations in the UK

An online petition initiated by Overseas Friends of BJP leader Subhash Sasidharan Nair has already been getting wide recognition. It is time for Keralites in UK to support this online petition to add momentum to the efforts initiated from various quarters.

Subhash has already made contacts with politicians. On speaking to this website he said: “I hope to wrap up the signature campaign by Tuesday 5th January 2021 and submit a memorandum to the authorities for them to take notice of the demand from Keralites in the UK”.

Subhash’s petition read as below:

Air India’s London Kochi services started by central government are a great relief to the UK Malayalees during the Covid period. It goes without saying that the services, which were initially increased to one a week and then to three, have greatly helped travelers in Kerala and nearby states during this time of distress.

But Malayalees in the UK are disappointed that Kochi has been left out of the resumption of suspended services. . This has created a major crisis for travellers from Kerala who aware planning travel UK for their work and education as well as the travellers from UK who already stranded in Kerala.

In view of the above, we humbly request that Kochi be included in the resumption services listed by Air India as soon as possible.

The UK Pravasi Help Desk group has also taken up the matter with the Indian High Commission in London by writing a letter and have initiated parleys between politicians in the Kerala and India.