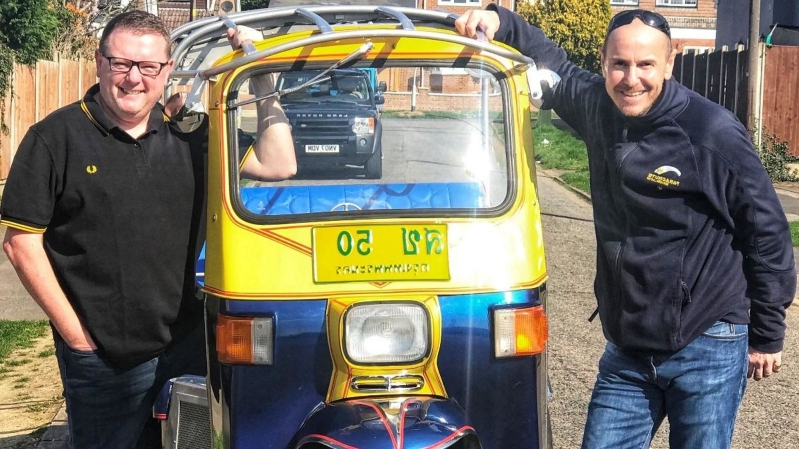 LONDON April 23: An Essex man who bought a Thai tuk tuk during a “boozy night on eBay” has souped the three-wheeled vehicle up to try to beat the current tuk tuk world land speed record of 68mph.

Freight firm boss Matt Everard, 46, will be joined by his cousin, 49-year-old Russell Shearman, who will be his passenger for the Guinness World Record attempt at Elvington Airfield in North Yorkshire.

Married father-of-two Mr Everard, from Billericay, bought the 1971 Bangkok Taxi from an eBay seller in Bolton in 2017.

He described the purchase as the result of a “boozy night on eBay, and maybe a mid-life crisis”, adding: “Imagine explaining to your straight-talking Essex wife that, after she went up to bed one night, you ended up buying a Thai tuk tuk from a bloke on the internet.”

He said he has since sunk £20,000 into improvements during a five-month rebuild, which included replacing the original two-stroke 350cc engine with a modern 1300cc fuel-injected Daihatsu van engine.

He said he hopes the tuk tuk is capable of reaching 90mph.

Mr Everard describes himself as a petrolhead who at one point owned eight cars, two boats, a jet ski and a quad bike.

He said his love for speed was inspired by his father, who owned various sports cars throughout his life, including a Jaguar, Ferrari and Porsche.

Guinness World Records defines a tuk tuk, or autorickshaw, as a three-wheeled motorised vehicle, derived from the cycle rickshaw, which is capable of carrying at least two passengers on a bench behind the driver.

According to the pair’s charity fundraising site, Mr Shearman spends “his spare time jumping out of planes with a parachute or wingsuit, reaching speeds of over 200mph”.

The attempt will be subject to weather conditions. The pair are raising money for Havens Hospices in Essex.