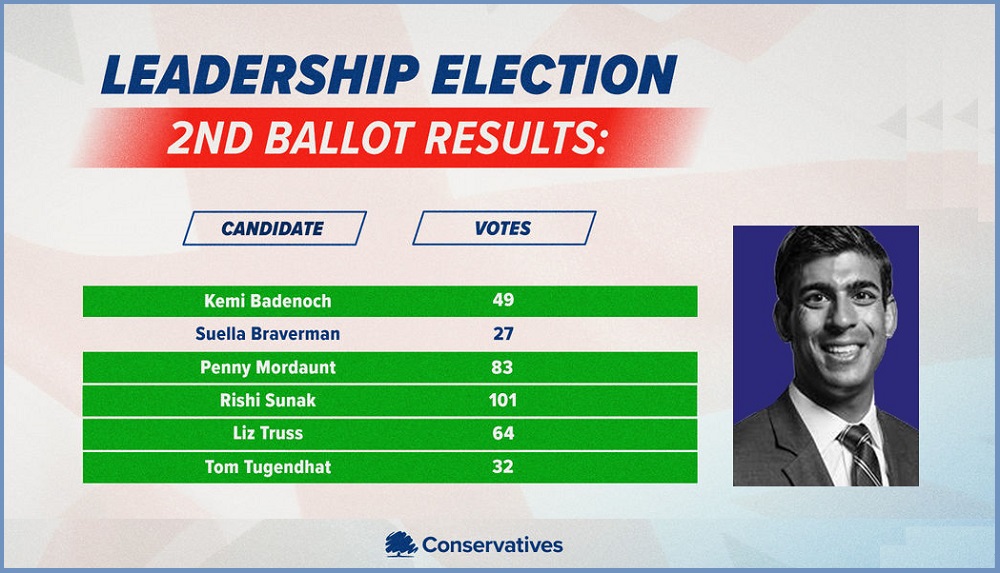 LONDON July 17: Almost half of the voters for the UK’s governing Conservative Party believe Rishi Sunak will make a good Prime Minister, according to the results of a new opinion poll on Sunday.

‘The Sunday Telegraph’ reports that the JL Partners poll of more than 4,400 people found that 48 per cent of those who backed the Tories in the 2019 general election felt the British Indian former Chancellor would be a good Prime Minister.

This is also the first poll that puts Foreign Secretary Liz Truss in second place, with 39 per cent backing her for Prime Minister and 33 per cent in favour of Trade Minister Penny Mordaunt.

The survey comes as the race to elect Boris Johnson’s successor as the next Conservative Party leader is narrowing down to these three main contenders, with former equalities minister Kemi Badenoch and Parliament’s Foreign Affairs Committee Chair Tom Tugendhat in fourth and fifth place, respectively.

“Among those who have heard of Mordaunt, the overwhelming view is one of neutrality,” James Johnson, co-founder of JL Partners and a former Downing Street pollster, told the newspaper.

“Sunak invites strong opinions. One-third of voters think he would be good in the top job, one third do not. But in an unpopular field where every other candidate is in net-negative territory, this score draw makes him the public’s favourite. He is particularly popular with the all-important 2019 Conservative voter, as the only candidate to have half approve of him,” he said.

Among all voters, the most popular policy priority was to “turn the economy around”, with addressing the National Health Service (NHS) backlog and restoring trust and integrity in public life coming second and third respectively.

The survey, carried out last week, puts the Opposition Labour Party 11 points ahead of the Conservatives, on 42 points to the Tories’ 31.

“While the public chew over the economy, the NHS and public trust, Conservative MPs may have a much simpler question: who is the best candidate to hold their seat? On this evidence, the answer is Mr Sunak,” added James Johnson.

An MRP model, which maps survey results onto every seat in the country, found that, among all voters, Sunak had the highest net approval score in 76 per cent of the seats won by the Tories in the last general election over two years ago, compared to 19 per cent in which Tugendhat came out on top and five per cent in which Mordaunt had the best score.

Sunak, 42, has topped the first two rounds of voting among Tory MPs last week and the next few rounds of voting in the coming week are set to narrow down the field further, with only two left in the race by Thursday.

While Sunak is a clear favourite among the Tory MPs, some polling among the Conservative Party members who will have the final say has had Mordaunt in the lead.

However, a survey overnight for the Conservative Home website of 850 Tory members put Badenoch in the lead on 31 per cent, with Truss second on 20 per cent, Mordaunt third on 18 per cent, Sunak fourth on 17 per cent and Tugendhat fifth on 10 per cent.

Postal votes will be sent out to around 160,000 Tory party members who are eligible to vote and they will decide the eventual winner and new Prime Minister to be announced on September 5. – PTI