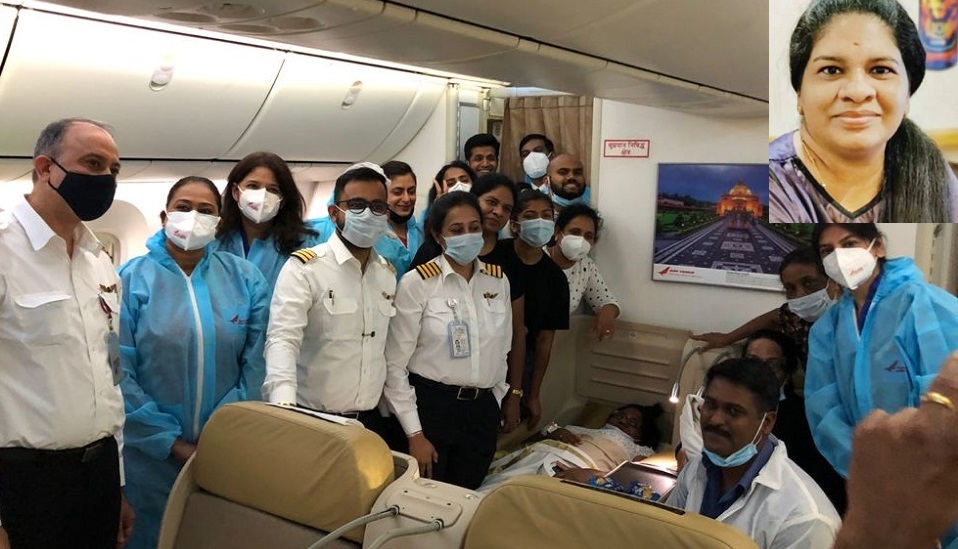 LONDON Oct 8: A Keralite woman from UK gave birth on an Air India flight from London to Kochi on Tuesday night with help from Malayalee nurse and a team of doctors and other medical staff.

Maria Philip, a native of Pathanamthitta, who was seven months pregnant, experienced labor pains when the plane took off from London. The woman then gave birth with the help of two doctors, four nurses and cabin crew on board.

According to news reports, it was a Keralite nurse Pratibha Keshavan who led the delivery. Pratibha Keshavan works with the NHS at the Cambridge Hospital in UK. She was travelling to Kerala to visit her parents who fell ill due to Covid.

We had a surprise arrival mid air.A baby boy was born. (1/4) pic.twitter.com/SMDtBxb1ba

The Air India flight took off from London to Kochi at 1.25 pm on Tuesday. Shortly after takeoff, Maria, a native of Pathanamthitta, collapsed on the floor of the plane due to labour pains.

(2/4) Kudos to our crew and special salute to doctors and medical staff on board for making this easy for the mother. Our aircraft is well equipped with all necessary medical equipment and our crew are experienced to handle this kind of eventuality. pic.twitter.com/xjh3UBYNS2

Later, the plane landed at Frankfurt Airport to provide medical assistance to the mother and baby.

The flight landed in Kochi at 9.45 am on Wednesday, six hours late. The pilots, doctors and staff were congratulated under the leadership of CIAL.

Pratibha is the wife of Prasad at Kumarakom Athikkalam House.

(4/4) Our officials are in constant touch with the family and all necessary support is being provided. Soon they will be flying home with us .

May God bless the baby with a healthy and long life. pic.twitter.com/Csges4Jbs9

The plane was controlled by female pilot Shoma Sura.

The flight returned from Frankfurt with a delay of six hours and landed at Kochi Nedumbassery at 9.45 am on Wednesday.

In a late evening Facebook post on October 6, Air India said, “AI 150 of 5th Oct, enroute to Kochi from London with 202 pax, landed in Frankfurt with 203 passengers. We had a surprise arrival mid-air. A baby boy was born.”

The airline said its aircraft is well equipped with all necessary medical equipment and its crew are experienced to handle this kind of eventuality.

The mother along with the baby and another passenger de-boarded and were taken to a hospital in Frankfurt, the spokesperson said, adding that the baby was doing fine.

The hospital are in touch with Air India’s head office and once Maria and baby are safe to travel they will reach their destination.

“Our officials are in constant touch with the family and all necessary support is being provided. Soon they will be flying home with us,” Air India said.