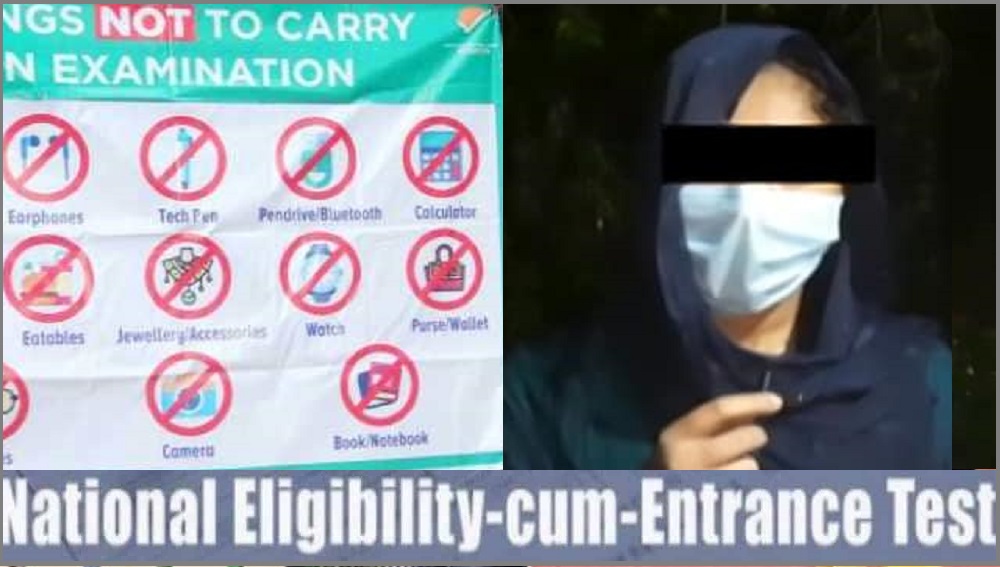 THIRUVANANTHAPURAM July 20: With protests intensifying, five women were arrested in Kerala for allegedly forcing girl students, who appeared for medical entrance exam NEET, to remove their bra during frisking even as a fact-finding committee was constituted to look into the allegations.

Earlier, the National Testing Agency (NTA) rubbished the claims of a 17-year-old student that she was asked to remove her innerwear on Sunday saying the exam centre superintendent has informed that the complaint is “fictitious” and filed with wrong intentions.

While three of the arrested women worked for an agency hired by the NTA, two worked for the private educational institution at Ayur in Kollam where the incident happened.

Another applicant from the centre has come forward and spoken now to local television channels about the incident.

The state police registered a case based on the complaint of the girl, who alleged that she was asked to remove her bra before she could be permitted to appear for the eligibility test. The NTA, which conducts the test, set up the panel after the Kerala government took up the issue with the Centre seeking strong action.

The arrest followed protests that began on July 18. The protests intensified and turned violent on Tuesday in Kerala’s southern region of Kollam.

The personnel reportedly objected to the metallic hook in the innerwear.

Taking note of the allegation, the Union Ministry of Education (MoE) said that it has been brought to its notice through various media reports that an incident allegedly happened in one of the centres of NEET (UG)-2022 in Kerala. Accordingly, the Ministry said, a fact-finding committee was constituted by the NTA to ascertain the facts in detail.

“Further action will be taken based on the report of the fact-finding committee which will visit Kollam,” a senior MoE official said.

The panel will visit Kollam to ascertain the facts.

The Kerala Women’s Commission, on its part, also registered a case based on complaints it received. An agency hired by NTA, in Kollam, for purposes including carrying out frisking, allegedly asked the girl students to remove their innerwear.

The complainant was the 17-year old girl. Several other girl students made similar allegations, though they have not separately filed police complaints.

Kerala Higher Education Minister R Bindu, in a letter to Pradhan, expressed “dismay and shock” at the news of “naked assault on the dignity and honour of the girl students.” Bindu sought action to prevent future occurrences of a similar nature and sought the Union minister’s intervention in the matter.

A senior NTA official, however, said: “No complaint or representation has been received by us. On basis of claims in media reports, an immediate report was sought from the centre superintendent and observer. They have informed that no such incident took place and the complaint is fictitious and has been filed with wrong intentions.” The NEET dress code does not permit any such activity as alleged by the parent of the candidate. The code provides for ensuring sanctity and fairness of exam while observing sensitivity towards gender, culture and religion during frisking of candidates, the NTA official added.

Based on the girl’s complaint, police registered a case. IPC Sections 354 (Assault or criminal force to woman with intent to outrage her modesty) and 509 (Word, gesture or act intended to insult the modesty of a woman) have been invoked, police said.

In a statement, the Kerala Women’s Commission said based on the two complaints received, it was convinced that prima facie these were actions that insulted women. The chairperson of the commission also asked the NTA, to take action against those responsible for the incident. – PTI