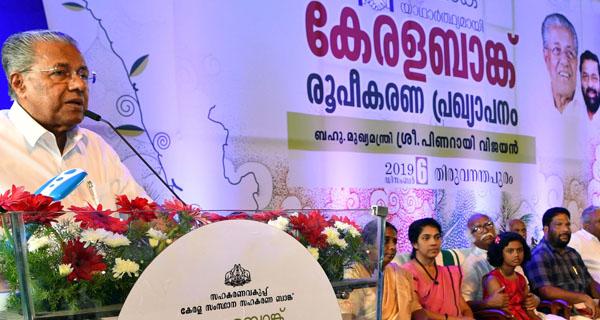 THIRUVANANTHAPURAM: The Kerala Bank, an amalgamation of district co-operative banks in the state, was formally launched by Chief Minister Pinarayi Vijayan on Friday, fulfilling a long-pending dream of the Left front government.

It will provide “unlimited opportunities” for the state and also facilitate transactions in other countries with a considerable population of Keralites, Vijayan said at a function here which was boycotted by the Congress-led UDF opposition.

According to government sources, 13 district co-operative banks (DCBs) are being merged with the Kerala State Co-operative Bank for forming the Kerala Bank.The UDF had been opposing the idea saying had alleged it would destroy the traditional cooperative sector.

“All district cooperative banks have a strong base. And when all these merge together and form one bank, it will soon become the biggest bank in the state,” Vijayan said.

He also said that the bank will facilitate transactions in other countries with a considerable population of Keralites.”We Keralites are spread all over the world. They can invest in the Kerala Bank. We need to get permission from the Reserve Bank of India to receive deposits from the NRIs.

We have applied for that,” he said.The chief minister also added that the bank will have all the latest facilities, including Core Banking.He offered to discuss with the opposition parties and clear their apprehensions.

“I would like to publicly appeal to those who have stayed away from this function that if they have any misunderstanding I would like to request them to hold talks with the concerned minister or if that is not enough, I am always ready to discuss the matter,” Vijayan said.The bank became a reality with the Kerala High Court on November 29 dismissing a batch of petitions against it.

Minister for Cooperation Kadakampally Surendran had said the setting up of the bank opens up a huge potential for the development of the state.All the DCBs barring the Malappuram District Cooperative Bank controlled by the UDF have approved the government’s proposal for amalgamation in their respective general body meetings.

The RBI had earlier granted its nod for the Kerala Bank the objective of its formation, according to the government, was to strengthen the cooperative sector.