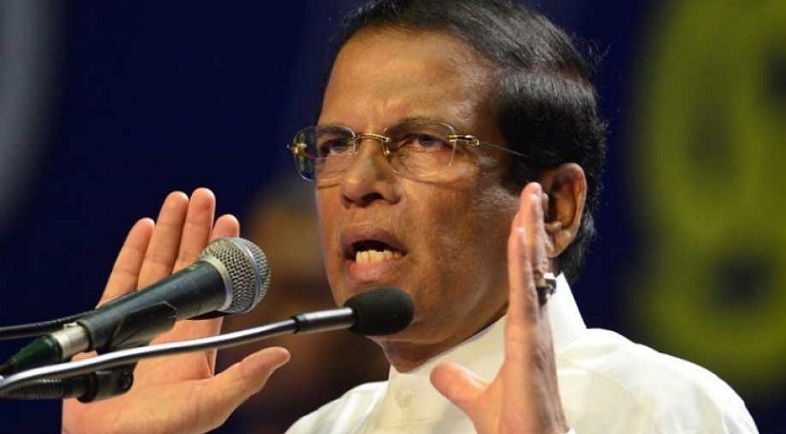 COLOMBO May 7: The ISIS terror group chose Sri Lanka to stage a massive attack on Easter Sunday to tell the world that they exist, President Maithripala Sirisena said today, amid reports that the plot was hatched in war-torn Syria way back in 2017.

More than 250 people, including 11 Indians, were killed and nearly 500 others injured in the co-ordinated suicide bombings, which targeted three Catholic churches and three luxury hotels.

The ISIS terror group claimed the attacks, the island nation’s worst, but the government blamed local Islamist extremist group National Thowheed Jamaath (NTJ). The government has banned the NTJ and arrested over 100 suspects in connection with the blasts.

Commenting on the claim of the ISIS that it carried out the attacks in Sri Lanka, President Sirisena said: “To be very honest, I am shocked and can’t understand why they chose Sri Lanka for this attack.”

He said the ISIS chose Sri Lanka as a target because the terror group has lost the ability to confront the world’s powerful nations.

“So they chose a country that had recently established peace to make the statement that ISIS still exist,” President Sirisena told the BBC in an interview broadcast on Monday.

Days after the carnage, the ISIS chief Abu Bakr al-Baghdadi in a propaganda video claimed the bombings in Sri Lanka was a revenge attack for the fall of the Syrian town of Baghuz, the terror group’s final bastion.

The US-led Kurdish fighters took over the last pocket of land in Syria held by ISIS recently.

Meanwhile, a group of terrorists who had gone to Syria to be trained by ISIS, had struck a deal in 2017 with the National Tauheed Jamaat Organisation to launch a fierce attack in Sri Lanka, Sri Lanka Mirror reported.

During the interview, President Srisena denied reports of a rift with Prime Minister Ranil Ranil Wickremesinghe. Both leaders are under attack by the Opposition for not acting on prior intelligence on the attack.

But President Sirisena said he was not to be blamed and refused to quit. “It”s clear that information had been received by those occupying top positions in the intelligence services.

However, I was not apprised of this information. They neglected their duties, which is why I have taken action against them,” he said.

“These persons have been removed from their offices and I have appointed a committee to investigate the matter,” he said, referring to the sacking of the defence secretary Hemasiri Fernando and the police chief Pujith Jayasundara.

“Nowhere in the world have heads of states resigned or relinquished their responsibilities after bomb blasts.

I believe my duty right now is to take the necessary action to face this challenge,” President Sirisena, who is at loggerheads with the prime minister for a long time, asserted.

“Contrary to the rumours, the prime minister and I do not have such serious issues to be cleared when it comes to action being taken with regards to matters relating to national security, political differences and issues are set aside,” he said.