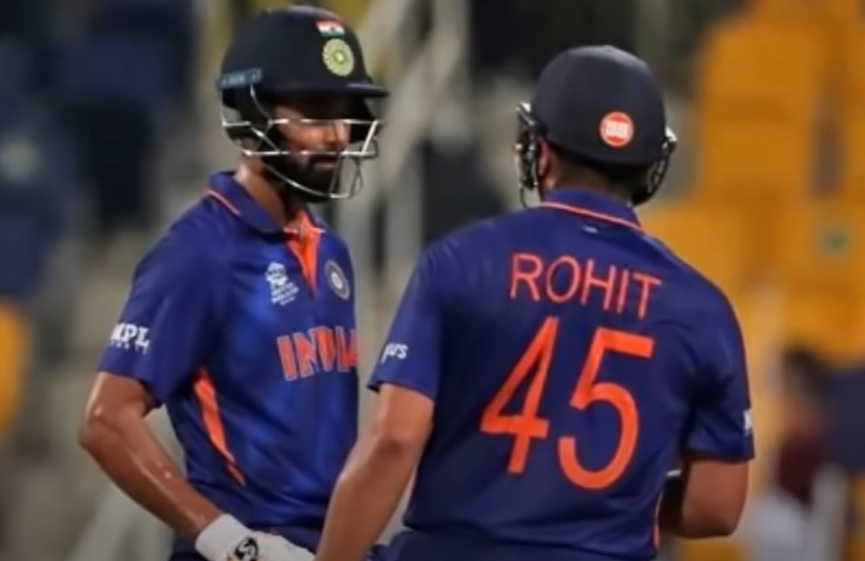 DUBAI Nov 3: A formidable India led by their stylish openers Rohit Sharma and KL Rahul finally put up a near-flawless performance to annihilate a hapless Afghanistan by 66 runs to stay afloat in the ICC T20 World Cup in Abu Dhabi on Wednesday.

It could well be a case of joining the party two games too late but a solid batting show to first score 210 for 2 and then bowl the disciplined lines to restrict Afghanistan to 144 for 7 kept their billion plus fans interested. With their net run-rate finally entering the positive bracket (+0.073), India would now hope that Afghanistan can recover from this drubbing and upset New Zealand, giving Virat Kohli’s men an outside chance to qualify for the semi-finals behind Pakistan who are set to top the group.

On the day, India did everything that perhaps was expected of them against the big teams. Rohit brought his carefree elegance to the table while Rahul was classy as ever in India’s imposing total.

While they would still have to bear the criticism of having flattered to deceive against Pakistan and New Zealand, Rohit (74 off 47 balls) and KL Rahul (69 off 48 balls) made a mockery of Afghanistan’s inexperienced attack, putting up a record 140 runs for the opening stand.

This was also the highest total in this edition of T20 World Cup but one can only hope that it hasn’t come two matches too late.

It couldn’t be denied that save Rashid Khan, who was taken to task by Rohit in his third over, the other Afghans were pedestrian at best, leaving Hardik Pandya (35 no off 13 balls) and Rishabh Pant (27 no off 13 balls) to feast during the death overs.

The Pandya-Pant duo clobbered 63 runs in 3.3 overs to take the total which was always going to be beyond Afghanistan’s reach.

When India bowled, Ravichandran Ashwin, playing his first international game in six months and white ball international after four years, was too good for the Afghans with figures of 2 for 12 in four overs that also had 12 dots.

Jasprit Bumrah (1/25 in 4 overs) was steady as usual while Ravindra Jadeja (1/19 in 3 overs) looked decent. Mohammed Shami (3/32 in 4 overs) got a bit of stick but picked wickets at regular intervals.

With no disrespect to India’s efforts, the gulf in bowling standards was evident in the disdainful manner that Rohit and Rahul treated the Afghan attack.

Hardik and Pant then added insult to the injury. The mid-130s speed of the pacers and lack of swing with not much pace off the track was an ideal recipe for disaster against the two Indian openers, who were smarting after back-to-back failures.

On a track where the ball was gripping, Afghanistan captain Mohammed Nabi started with his off-breaks and introduced left-arm spinner Sharafuddin Ashraf from the other end.

For the two Indian openers, who needed a few big shots to get into the groove, there couldn’t have been a more mouth-watering option as Rohit was the first one off the block with an inside-out lofted boundary over extra-cover off Nabi and a lap-shot off Sharafuddin.

When pacer Naveen ul Haq was introduced, Rohit opened his stance to slash the bowler past point and a straight six while Rahul also got his share of boundaries.

The 50 of the innings came in five overs but it was veteran pacer Hamid Hasan, who bowled the last over of the Powerplay to put a brief brake on scoring during that phase after the fielding restrictions were lifted.

However, the good start meant that 85 came off the first 10 overs with both openers looking solid for acceleration towards the back-10.

One of the better boundaries from Rohit was the one which he guided a Gulbadin Naib delivery towards third-man fence, using the bounce to inch towards his half-century.

The 23rd T20 International fifty came when he square-cut an off-colour Naveen to the boundary and Rahul followed suit with a six over square leg off the same bowler and then lofting Gulbadin over extra cover to reach the milestone.

By the time Rashid (0/36 in 4 overs) came for his final spell, Rohit and Rahul were competing to out-score each other.

Rohit saved his best for Rashid when he lofted the spinner towards deep mid-wicket even when he hadn’t reached to the pitch of the delivery but the bat-swing did it for him.

The next was picture perfect as it was sent soaring into grass banks. By the time Rohit was out trying to smash Karim Janat over extra cover, he had got eight fours and three sixes.

Rahul was also dismissed within another seven runs, being cleaned up by Gulbadin as he tried to shuffle towards off-stump but by then a solid platform for victory was already laid.

The Indian fans are hoping to see Afghanistan defeating New Zealand on November 7. It will ensure that both teams won’t have more than six points by the end of the Super 12 round. If it happens and then India go past these two sides with a higher run rate, then it’s definitely India and Pakistan making it to the semi-finals. – PTI