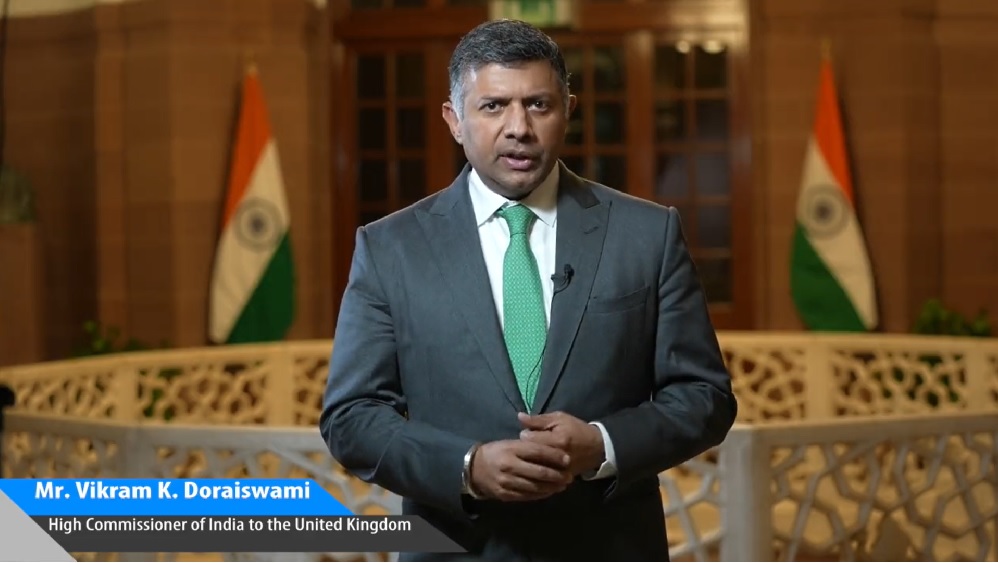 LONDON Oct 13: Indian High Commissioner to the UK Vikram Doraiswami took to Twitter on Wednesday to lay out the steps being taken to ramp up capacity and address the difficulty in getting an Indian visa by travellers from Britain. There has been a mounting backlog for Indian visas in recent months, as applicants complain of a shortage of appointments available and lengthy processing times.

Vikram Doraswami revealed plans for a new visa centre in Scotland by next week and one in central London by the end of the month, with the goal of doubling the capacity of visas handled by the outsourced VFS centres per month. “First and foremost, we understand that there has been difficulty in getting these appointments, we are doing our best to ameliorate the situation,” he said in his video message from India House in London.

“The essence of this effort is to ensure that we go up to about 40,000 visa applications per month, which is a doubling of our capacity,” he said. “We also hear your concerns with regard to the ease of being able to submit applications. We are working on solutions for this with our service provider and will have an update on that. Our goal is that you should be able to travel easily, with less difficulty, with less effort in getting your paperwork done for the holiday season,” he added.

Team @HCI_London recognizes the challenges and is committed to improving our delivery of visa services. Here’s a message by High Commissioner @VDoraiswami on what’s being done in this regard. @MEAIndia @IndianDiplomacy @CPVIndia @sujitjoyghosh pic.twitter.com/x0zXLF7bKD

The diplomat, who took charge in London at the end of last month, said his team is ensuring more bookings are being released on its online service and that these appointments are not being misused, which he said has been the case until recently.

“We are ramping up capacity in partnership with our service provider VFS; this includes the following steps: opening a new visa application centre in Glasgow by early next week. We will be opening a new one in central London, hopefully by the end of the month work is underway on that one. And, we are increasing capacity at our existing centres, including to handle and receive applications on Saturdays and afternoons and weekdays as well,” he said.

This comes amid reports of cancelled Indian holidays in the wake of visa appointments crunch as a result of soaring demand, with many travellers renewing their travel plans delayed by the Covid lockdowns. Last week, the High Commission had issued a statement to say it is investigating reports of unauthorised agents illegally charging fees to get visas processed for travellers to India.

“It has come to our notice that unauthorised agents and individuals are illegally charging fees and collecting India visa applications for submission at VFS Centres, misleading applicants and misrepresenting the services that they can legally provide,” the statement said.

It also reiterated that there had been no change in the visa application process for individual visa applicants. The UK is currently not included in the over 150 countries that can access the online tourist e-visa option when travelling to India, which has also caused considerable strain for tourists who are facing long waits at the outsourced VFS centres for their applications to be processed.

India’s High Commission is enforcing rules that require in-person visa applications for British citizens — a move that has caught out many in the travel industry.

Previously it turned a blind eye to visas that were being processed in batches, according to one specialist tour operator.

But on October 7 the High Commission in the UK stated applicants must attend visa centers in person, as it had noticed “unauthorized agents and individuals are illegally charging fees and collecting India visa applications for submission at VFS Centres, misleading applicants and misrepresenting the services they can legally provide.”

“There were a set of visa companies who would enter without an appointment, with 20 or 30 passports,” said Amrit Singh, co-founder and managing director of UK tour operator TransIndus. “They were being processed. All of a sudden, somebody higher up has realized that this is breaking the rules. So they’ve put a stop to it.”