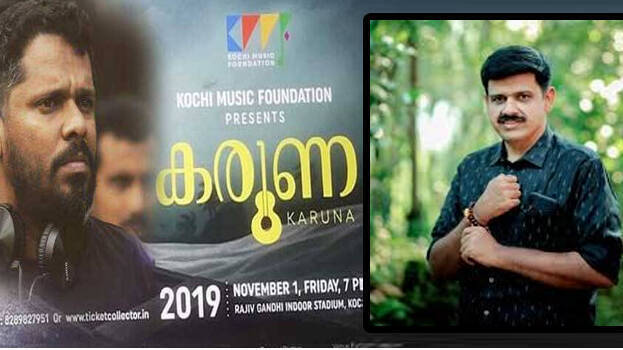 KOCHI  Feb 19: A police probe has been ordered on the complaint of a financial fraud in organising a musical event in Kochi. The music programme titled ‘Karuna’ was conducted at the Rajiv Gandhi Indoor Stadium in Kochi promising that the proceeds from the event will be given to the chief minister’s flood relief fund.

State secretary of Yuva Morcha Sandeep G Varier had lodged a complaint to the district collector seeking probe against the organisers of the event for financial fraud. The collector soon directed the police to conduct a probe on the issue.

The organisers had tried to drag the collector in the controversy saying that he was the patron of the event. The collector gave a strong warning against their move.

Director Ashiq Abu’s claim proved wrong when he said that the concert was not conducted for flood relief. The letter of Bijibal, a musician and one of the organisers of the event, to the chief minister seeking permission to conduct the programme at the stadium for free was revealed.

More proofs for not paying the amount to the government are coming in. Sports centre had decided to give the stadium for free as it was meant to collect money for the relief fund.

However, when the allegation was raised for not paying the amount, the sports centre had sent a letter seeking details from the members of Kochi Music Foundation.

The organisers refused to reply for the letter sent on January 3rd. The stadium was allotted free so as to collect money for the relief fund, have you paid the money and what are its details, these were the contents of the letter.

Only a month later, the government said it had not received the money. When the issue sparked a controversy, the organisers saved their faces by paying Rs 6,22,000.