LONDON Dec 4: Dr Omana Gangadharan is a noted writer, poet and a politician well known in London literary circles and most notably in Kerala known after the hit Malayalam film “Manivathoorile Aayiram Sivarathrikal” which was based on her novel Aayiram Sivarathrikal (The thousand Nights of Shiva).

Now, a poem of hers, titled “Silence of the midnight wind” (പാതിരാക്കാറ്റിന്റെ മൗനം), which was published in the recent edition of Kala Kaumudi weekly magazine has received rave reviews from noted musicians and the literati community in Kerala.

The poem was summed up in one word “Poornima” (light of full moon) by noted musician M Jayachandran. Several noted musicians have expressed their desire for her poem to be set to music for their upcoming albums and films. However, Dr Omana Gangadharan has not yet finalised it yet.

The poem links readers to climate change, the affection between a passing wind and a flowering tree. 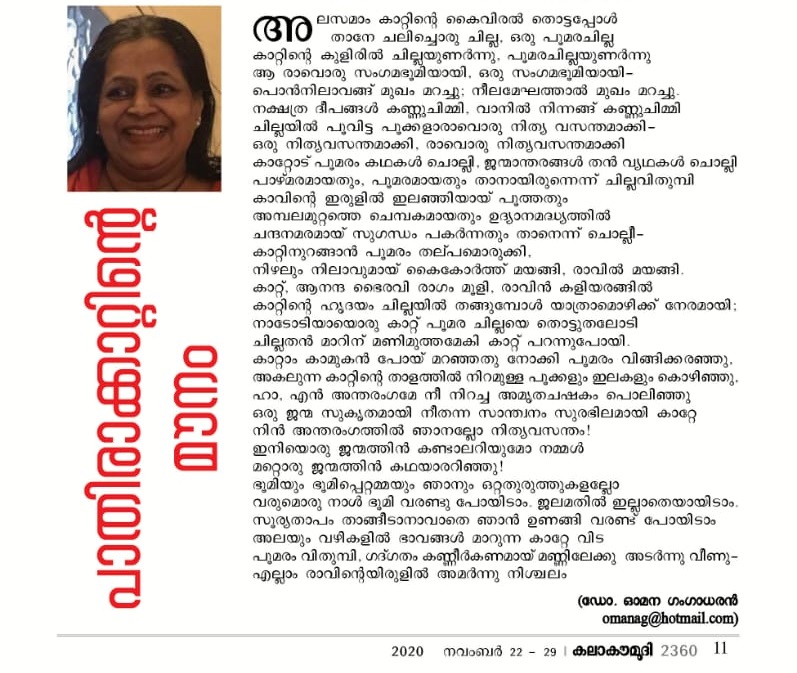 Dr Omana Gangadharan, who has been active in British politics for quarter of century and got elected since 2002, is at present a councillor in Newham borough in London. She had held the honourable position of Chair and Civic Ambassador of Newham Council, she founded the British Asian Women’s Network to help address the issues of Asian women in UK and also served as a non-executive director of NHS Board (National Health Service Trust) in London. She is also behind organising the famous Attukal Pongala in London for the last 14 years, which is considered to be the largest gathering outside India.

She is originally from Changanacherry in Kerala. After graduating from NSS Homeo Medical College in Kottayam she got married to Mr Gangadharan, hailing from Alappuzha, and arrived in London to settle in Newham since then.

The couple have two children Karthika and Kannan. Karthika works in government service and is married to Dr Sooraj who works as a GP in NHS. They have a son Atul who is a school student. Son Kannan works as a HR Director.

Currently she is in the last stages of completing another novel and a biography. Her latest work is a long poem in English about history of Britain and India which is awaiting publication. A novel based on the pandemic season is also at finishing stages