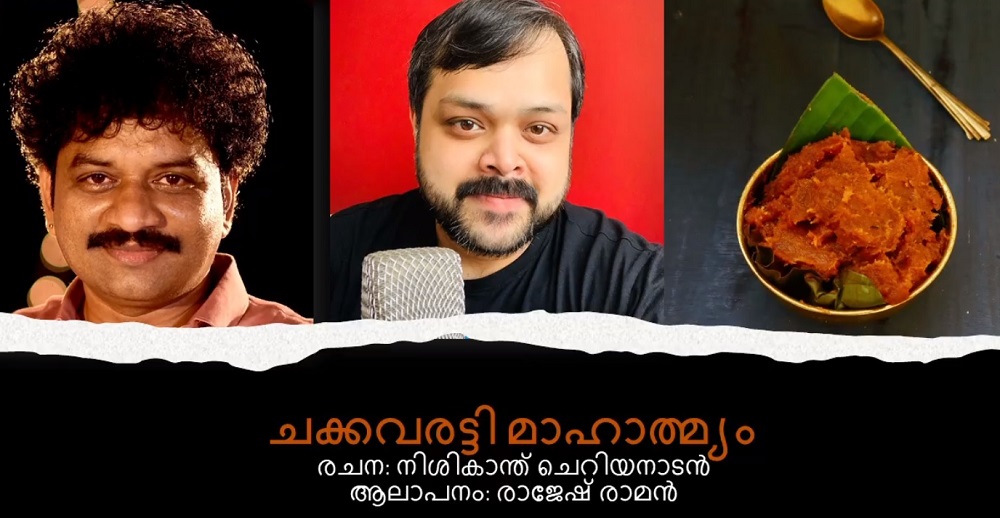 LONDON May 23: Numerous recipes appear on social media in various formats. However, now we have a recipe being shared as lilting poem and that too within just one minute long.

The lyrics was penned by Nisikanth Cherianadan. Rajesh Raman from London gave music to it and now the recipe video has gone viral on social media.

Nisikant, born at Cherianad, near Chengannur is a passionate lover of music and poetry and has been engaged in literature and music for more than 30 years. Fortunate enough to work with musical legends in the industry, he has more than 500 songs so far including comercial and online albums, started from “Ellam Swami” composed by Sri. M.K.Arjunan Master and sung by Sri P. Jayachandran, released in year 2005. Nisikant is now settled in Kerala with wife Savitha and two daughters.

Rajesh Raman is an accomplished classical singer who has been performing in various stages around the UK. Being an IT professional in the UK he juggles his time between work and pursuing his passions in singing. He has won several awards and recognitions including best singer award at Asianet’s Europe Talent hunt. Rajesh has been UK resident for 14 years and lives in East Croydon (south London) with wife Soumya and daughter Lakshmi.

Nisikant amd Rajesh are co founders of online music portal Www.Eenam.com which promotes copyleft music, and have worked together on more than 50 songs in various albums.

They have now teamed up for upcoming Salim Kumar starer malayalam movie “Sairayum Njanum” for the song ‘Paaluthirum Narupunchiriyal’, to be released in 2021.