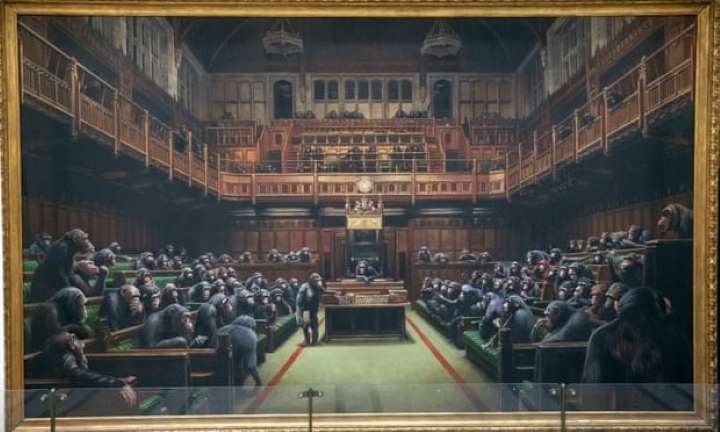 “Record price for a Banksy painting set at auction tonight. Shame I didn’t still own it,” the artist said on his Instagram account.

The previous auction record for a Banksy artwork was $1.87 million, achieved by “Keep it Spotless” at Sotheby’s New York in 2008.

The oil painting measures 4.2 metres by 2.5 metres unframed — the largest known canvas by the anonymous artist.

It shows chimpanzees on the green benches of the House of Commons, from the viewpoint of the main entrance.

The sale comes after the controversial five-week suspension of Britain’s parliament by Prime Minister Boris Johnson was deemed unlawful by the Supreme Court, with time running out before Britain is due to leave the European Union on October 31.

Parliament was due to return on October 14 but instead reconvened on September 25 after Britain’s highest court quashed the suspension.

When parliament returned, MPs spent their time angrily arguing over the suspension, and then arguing about whether their language in doing so was too strong.

Commons Speaker John Bercow said they were the most toxic scenes he had ever seen in his 22 years in the elected lower chamber.

“Inevitably what we have been seeing in the Houses of Parliament over the last few months and weeks has become a daily soap opera, not just in the UK… but also across the rest of Europe and indeed the world,” Alex Branczik, Sotheby’s European head of contemporary art, told AFP ahead of the sale.

“What he’s pointing to here is the regression of the oldest parliamentary democracy in the world into tribalistic animalistic behaviour, the sort that we’ve seen broadcasted on our televisions,” said Branczik.

“The real genius of Banksy is his ability to reduce this incredibly complex debate into one single simple image, which importantly is very readily shared in this age of social media and a very image-consuming population.”
‘Tumultuous face of politics’

Banksy first unveiled the painting, then entitled “Question Time”, a decade ago for an exhibition in his home city of Bristol, southwest England.
He later reworked and retitled the painting, snuffing out the lights and making an upturned banana face downwards.

The seller bought the painting from Banksy in 2011.

“Potent and poignant, bold and brash, Banksy’s monumental oil painting of the House of Commons offers a premonitory insight into the increasingly tumultuous face of politics in contemporary Britain,” the sale catalogue says.

“His derisive art has provoked divisive opinion, but love him or hate him, his wide-reaching influence on contemporary art and urban culture cannot be denied.”

It also notes: “This work is accompanied by a pest control certificate.”
Banksy got the painting out again for March 29 this year, when Britain was originally due to leave the European Union.

Thursday’s auction took place almost a year after Banksy’s “Girl With The Balloon” partially shredded itself as the hammer came down at Sotheby’s, becoming the freshly titled “Love Is In The Bin”.