MUMBAI Nov 7: India’s richest person Mukesh Ambani is not relocating to London, Reliance Industries has said in a statement.

In brief release issued on Friday, the Reliance Industries Limited chairman categorically rubbished the latest media reports that claimed Ambani, and his family will be dividing their time between their Mumbai abode and newly acquired London property. Terming the newspaper report as ‘unwarranted and baseless speculation’, Reliance Industries has said that Mukesh Ambani has no plan to relocate to London ‘or anywhere else in the world.’ 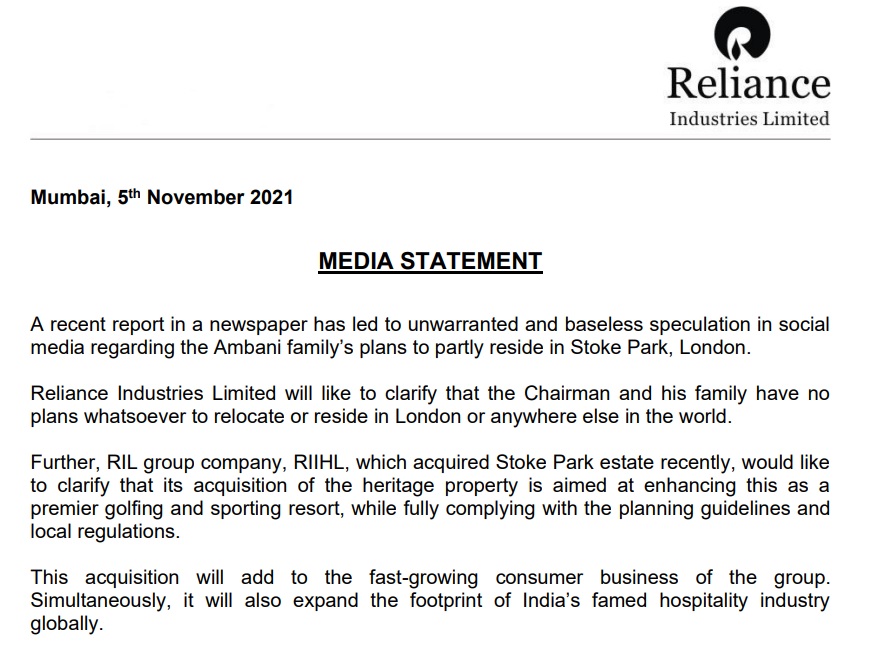 “A recent report in a newspaper has led to unwarranted and baseless speculation in social media regarding the Ambani family’s plans to partly reside in Stoke Park, London. Reliance will like to clarify that the Chairman and his family have no plans whatsoever to relocate or reside in London or anywhere else in the world,” the company said in a statement.4

Recent reports had said that the Ambani family is expected to make the 300-acre country club in Buckinghamshire, Stoke Park, their primary residence.

The Reliance group said that its Reliance Industrial Investments and Holdings Limited, “which acquired Stoke Park estate recently, would like to clarify that its acquisition of the heritage property is aimed at enhancing this as a premier golfing and sporting resort, while fully complying with the planning guidelines and local regulations.”

“This acquisition will add to the fast-growing consumer business of the group. Simultaneously, it will also expand the footprint of India’s famed hospitality industry globally,” the statement said.