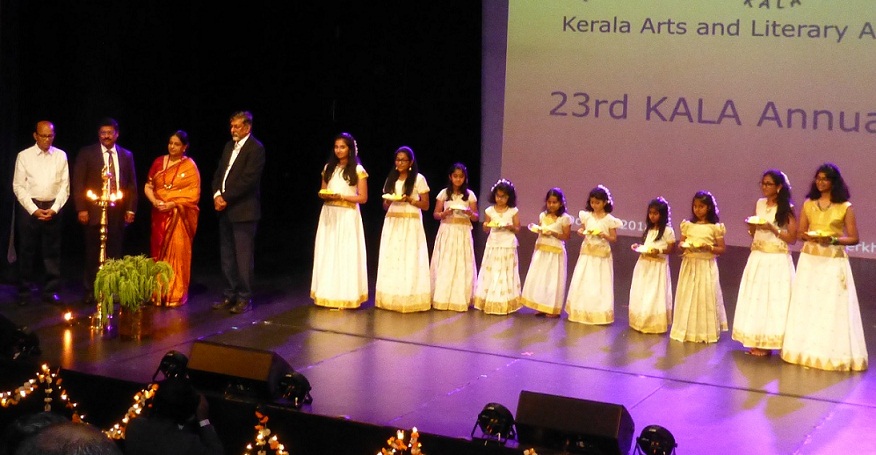 BERKHAMSTED (HEMEL HEMPSTEAD) Oct 28: KALA events never let you down. The name has now become synonymous with the word consistency.

KALA evenings sets you up with an enjoyable emotional engagement with classical arts, music and fun. The dedicated team’s conscious creation of something beautiful or meaningful using skill and imagination lies in the success of their shows.

It has been 23 years and it still remains the beacon torch bearer of Kerala arts and culture in the UK holding them in the highest pinnacle.

The 23rd Annual Day event, held on Saturday October 23, 2019 in Berkhamsted in Hertfordshire, too has set its mark as a milestone in the history of this organisation.

The attendees who had to beat the inclement weather to reach the venue were welcomed in with hot samosas, vadas and tea which put them at ease to socialise and catch up with friends and companions with hugs and handshakes. The camaraderie, friendship and warmth were seen all over the place with an atmosphere of positive vibes.

The reception and refreshments paved way to welcome the guests with thaalappoli by children dressed up in Kerala attire, a beauty to adorn for ever. The evening was compered by Sree Kumar  and Ramesh Nair.

Following the speeches by the president and patron, the chief guest Tara Rajkumar, an international exponent of the art forms Kathakali and Mohiniyattam, spoke about how she went on to set up Academy of Indian Dance in 1979 in the UK. She elaborated on the efforts she has put to bring Indian dance forms to mainstream art to the British audience and for them to accept it as an art form alongwith theirs and finally securing a place for of its own at venues such as Southbank and Battersea.

Tara said that her marriage brought her to the UK and then to Australia where she was able to teach Indian classical dance on foreign shores.

She said that it depends on the person who you come with lies in the success as her husband provided her with all the support she requires to realise her dream and potential. This was followed by the release of Palmleaf magazine by its editor Dr Seena Praveen by giving a copy of it to Tara Rajkumar. The 116 page magazine had ‘films’ as the theme where writers both from the UK and outside contributed to how films have caught the imagination of people in their daily lives.

KALA’s Youth Coordinator Anjana Jeevan provided the audience with an update on their activities which involved raising funds for the flood affected victims back in Kerala. Nangyar Koothu by Dr Indu G was a new experience for the attendees. The display of the story in the background helped the audience which included the younger generation to savour it. Dr Indu came back later to give the audience an act to show the Navarasangal.

Dr Indu G was honoured with the KALA puraskaram in the presence of the dignitaries of the evening. The honour was in recognition to her outstanding contribution to Nangyar Koothu, part of Koodiyattam, which UNESCO has accepted as an heritage art form. Ventriloquism by Sam Jones brought in a break in KALA tradition where it catered to only to Kerala arts forms. The breakaway from the age old following was for KALA to become more inclusive and also incorporate the interests of the younger generation. KALA Natakavedhi’s dance drama Krishnapatham, a depiction of Krishna’s path in four steps, was a visual delight which was a treat to the ears and eyes. Krishnapatham was the depiction of Kurushethra war compared to the present day and the yearning for Krishna to come back and save the world from the evil. The imaginative piece delivered a strong message for a saviour to arrive to stop the bloodshed and evil.

Rasa Leela, dance adoption by KALA youth again showed the love they have towards performing at such stages and KALA can be proud to have their next generation lining up to take responsibility of this organisation in years to come.

The dinner break gave the audience a treat of delicious delicacies from the Muziris Restaurant. This was followed by an excellent dance performance title Shiva Sthothram by mom and daughter duo Archana and Athithi.

The comedy skit Nanma Maram by KALA Theatres elicited laughter and applause from the crowd as it played on the yesteryears of a group of school children who get together for a school reunion years later and finally sending out a gentle message to look after those disadvantaged teachers by keeping them in your mind as you move forward. Margi Madhu’s Chaakyar Koothu by was non stop laughter with the chakyar poking fun at all including the patron Dr Sukumaran Nair, who was at one time praying to the chakyar to leave him alone. This brought the whole KALA events to a close with a vote of thanks by Mony Kochupillai with one more session titled Ormakalil Babukka, left for the evening.

Ormakalil Babukka was a nostalgic retreat for the audience to listen to those great melodies woven by the great maestro. Mohammad Sabir Baburaj, known as MS Baburaj, was a Malayalam music composer, often credited for the renaissance of Malayalam film music who has rendered music to many evergreen Malayalam film songs. To know more about KALA activities or get associated visit www.kala.org.uk