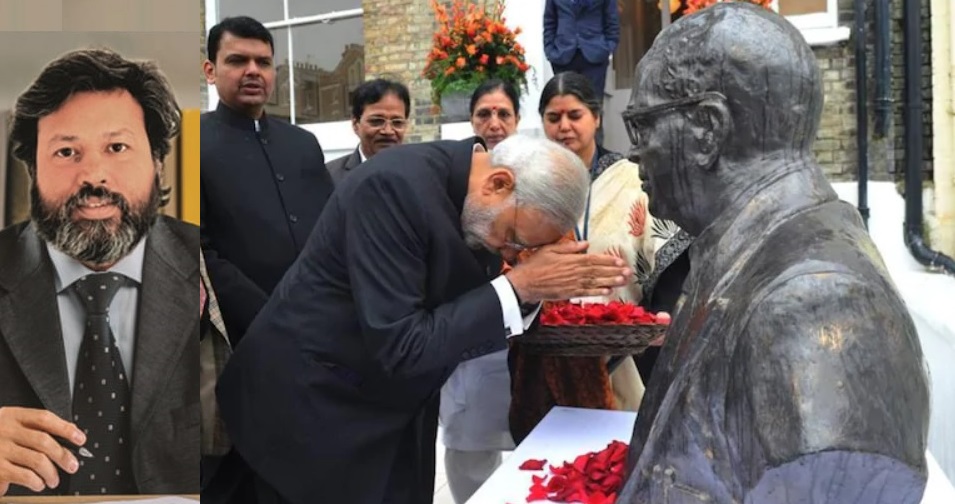 LONDON Dec 7: Local authorities in north London have formally cleared the operation of Ambedkar House as a museum in honour of the architect of the Indian Constitution after it was approved as a landmark associated with “one of the founding fathers of modern India” earlier in the year.

Janeevan John of Singhania & Co Solicitor was behind securing an important piece of history owned by India in the UK. The Ambedkar Museum in London’s plush Primrose Hill in London was the home of Dr BR Ambedkar, the architect of the Indian Constitution.

Dr BR Ambedkar lived at 10 King Henry’s Road in Primrose Hill between 1921 and 1922 and therefore, it was bought by Maharashtra government in 2015 to be converted into a museum.

However, Camden Council, under which the property comes under, argued that BR Ambedkar’s stay in Primrose Hill was too short and that he wasn’t well-known enough in Britain to be a person of wider interest and this conversion will result in the loss of residential units.

The enforcement notice served by Camden Council was challenged by Janeevan John of Singhania and Co. in the Public Enquiry on behalf of the Indian government.

Camden Council gave the final go-ahead for the museum after UK Communities Secretary Robert Jenrick had intervened to grant retrospective planning permission for 10 King Henry’s Road in Camden, where Dr Babasaheb Ambedkar lived in 1921-22 during his student days at the London School of Economics (LSE).

However, the minister’s March order, which came at the end of an inquiry following an appeal against Camden Council’s planning refusal, came with a set of conditions.

“The Camden Council has now given permission for the cycle stand and approved the Management Plan and therefore the conditions attached with the Secretary of the State [Jenrick] order dated 12th March 2020 stands complied with,” Janeevan John, of Singhania & Co Solicitors which dealt with the appeals process for the Indian High Commission in London, said in a statement on Friday.

“The long-awaited operation of the Ambedkar Museum is all set to start,” he said.

Janeevan John lives in Essex with wife and two kids. He was brought up in Muvattupuzha, near to Kochi.

The UK Ministry of Housing, Communities and Local Government stepping in meant that the government was to decide on the matter based on recommendations from an independent Inspector appointed by the UK’s Planning Inspectorate.

The Inspector oversaw an inquiry into the Indian government’s appeal last year and presented his findings to the minister.

“I was pleased to grant planning permission for a museum in London to Dr Ambedkar – one of the founding fathers of modern India and an important figure to many British Indians,” said Jenrick.

Camden Council, the local authority which had opposed the application, said it accepted the decision based on additional evidence provided by the Indian authorities.

“Whilst we are disappointed that the Planning Inspectorate has ruled against the council’s original decision for 10 King Henry’s Road, we do accept and respect the decision that has been made given the additional evidence presented by the appellant at the Inquiry regarding Dr Ambedkar, who was a major figure in Indian and British History and his association with this property,” a Camden Council spokesperson said.

The home was bought by the Maharashtra government for around 3.1 million pounds and refurbished to transform into a memorial-cum-museum, which now houses photographs and belongings of Ambedkar, with the walls adorned with his famous quotations.

It had been an important stop on Narendra Modi’s first visit to the UK as Prime Minister in November 2015, but ran into trouble after it emerged that the right clearances for the creation of a museum on the site had not been sought.

The Indian High Commission in London re-filed an appropriate planning application, which was rejected.

During an appeal hearing in September 2019, the Indian side argued that the home holds special significance for a huge section of Indians in the UK and outside because it was where Babasaheb lived during a crucial formative period in his academic life.

The council, on the other hand, presented expert witnesses to try and establish that the Dalit rights activist’s association with the particular London house was very brief and any memorial can be moved elsewhere in order to not deprive the local area of crucial residential and housing space.

With all the conditions now being met, the property can resume its operation as a memorial for visitors.

This weekend also marked the 64th death anniversary of Babasaheb Ambedkar, who died on December 6, 1956, at his home in Delhi at the age of 65.