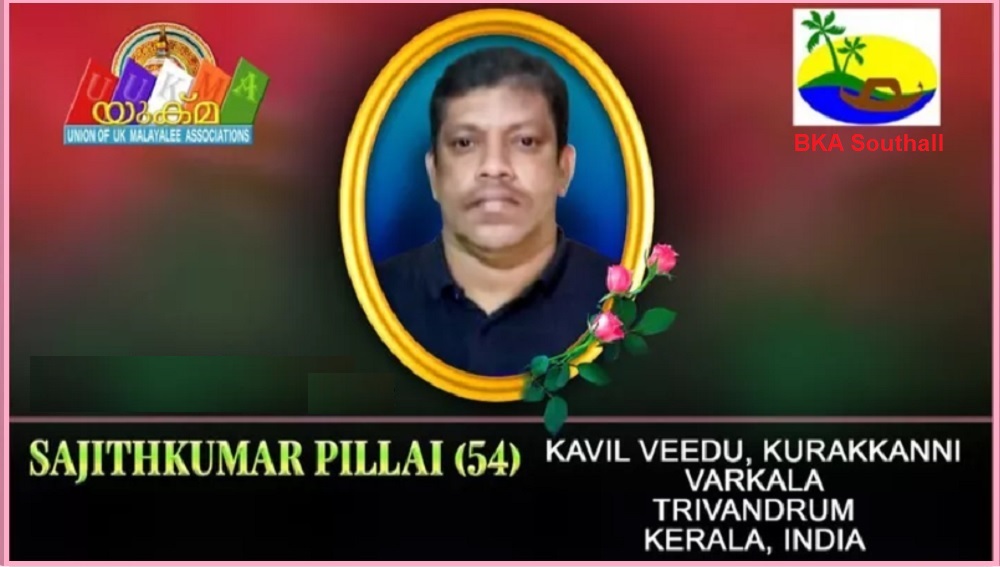 LONDON Feb 22: On Sunday, February 20, 2022, the body of Late Sajith Kumar Pillai (54), who passed away on February 3rd at his flat in Southall, was cremated in his family home in Varkala, Thiruvananthapuram district.

Sajith Kumar, a British passport holder with OCI status, was living alone on Southall’s Ranelagh Road. On the 3rd February, he was discovered dead in his flat. After speaking with his son and wife in Kerala, the Malayalee community in the UK quickly joined together to take responsibility for the remains.

To have the body repatriated, the group members communicated with the appropriate authorities, including the council, coroners, Indian High Commission, funeral directors, and NORKA Roots in Kerala and UK.

The group members were also in frequent communication with bereaving relatives in Kerala, keeping them informed.

Finally, on Sunday, February 20th, the body arrived in Thiruvananthapuram airport after receiving all necessary clearances from the authorities. Ramachandran (Croydon) and his family received Sajith Pillai’s body at the airport.

Sajith’s body was transported from the Thiruvananthapuram airport to his house in Kavil Veedu, Kurakkanni, Varkala, in a NORKA-arranged ambulance.

Ramachandran, a Croydon resident who attended the funeral in Varkala, wrote to the group to inform them that, “The funeral service concluded at 9am in Varkala, and the body was cremated. Everyone’s efforts have been fantastic”.

The entire repatriation procedure was made possible by funds raised by BKA with the help of UUKMA and hundreds of philanthropic UK Malayalees.

In a note addressing to UK Malayalees, Sajith’s wife Sobha Sajith Kumar wrote: “We kindly express our gratitude towards the whole UK Malayalee associations and people who involved on the repatriation of my husband to his native place. We are especially thankful to UUKMA and British Keralites Association for your kindness and for all your help at the time of our loss. Thank you for everything you have done for us. Also give our thanks to all the agencies and people who gave support and caring help during a very difficult time. Once again we give our heartfelt thanks to all of you.”

Sinto Antony, treasurer of BKA wrote: “Well done team! Fantastic results. Glad I could be a part on behalf of BKA. Enjoyed working with UUKMA team and all others”.

Jose Gregory of British Keralites Association wrote: Well done to the associations, www.ukmalayalee.com and all the individuals involved. Of course big kudos to those who were leading and coordinating this great effort to repatriate Sajith’s body and organising support for his family during this challenging and difficult time”.

Muralee Nair wrote: “Thanks to everyone who has supported taking Sajith back to his family. I agree, this has been a wonderful effort by all and it has been very humbling to see the kindness and compassion shown to Sajith and his family at this difficult time and the dignity with which Sajith’s body has been returned to his family. You are all wonderful human beings”

Mini wrote: “Above all, I’d like to thank BKA (Southall), MAUK (East Ham), UUKMA and NORKA Roots and UK for assisting us throughout the process. Let me also take this opportunity to thank the entire team. It’s been a long and winding road. Thank you for walking with me on every step of the way. This would not have been possible without your help and support. Thank you for becoming a part of the team. We’ve come a long way to get here, but we’re finally here. Thank you for the opportunity to work with you”.

Mini also acknowledged the efforts taken by this website to disseminated the information and also support the fund raising campaign. She wrote: “Thanks so much to www.ukmalayalee.com for its thorough coverage and campaign in this regard”