The book was released by Kottayam Nazeer who is a noted actor, comedian, mimicry artiste, film producer, screenwriter and most recently he started his career in painting.

The first copy of “Saramadhu” was presented by Kottayam Nazeer to Malabar Gold Executive Director A. K Faisal at the Writer’s Forum segment of the Fair, in the presence of other literary figures such as Geeta Mohan, Neetha Subhash and Prakashan Alokan who made felicitation speeches.

The novel is published by Kairali Books, one of the leading publishers in Malayalam.

“Saramadhu” is a novel that embeds language like a child’s babbling, imbuing each word with sublime simplicity.

The novel dwelves with beautiful scenes where Charvi, a Kathak dancer turns into Saramati, who falls in love with Madhukar.

The novel captures the pictresque scenic frames from the Silver Hill Buddhist Monastery in England to the beautiful villages of Rajasthan.

Contemplative backgrounds in Banaras, “Saramadhu” flows like a prose poem. 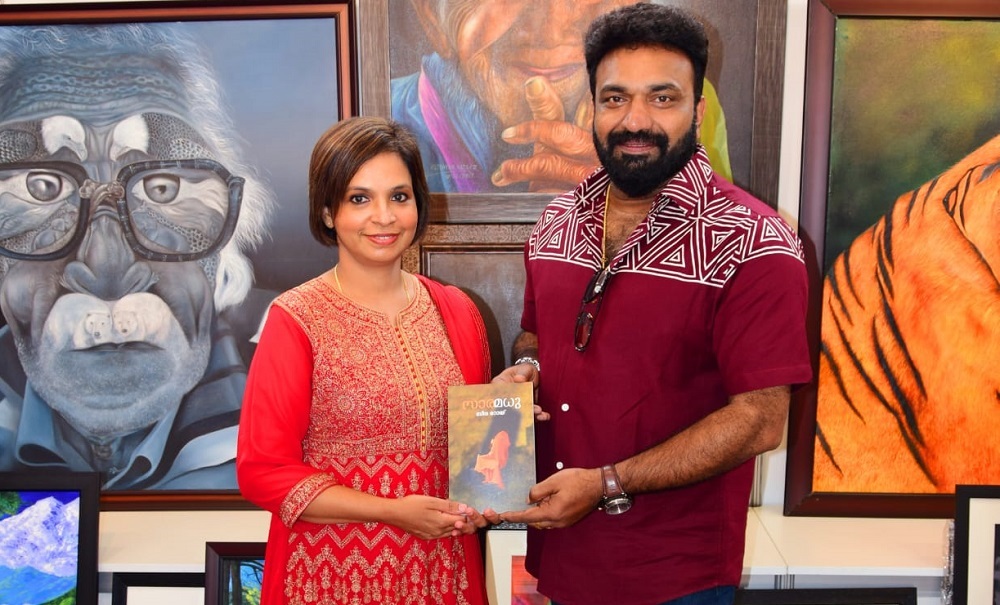 Writer Sukumaran Periyachur marks this novel as writing that has succinctly captured life as it is lived in reality.

London based Beena Roy strode into limelight with her two thoughtful poetry collections and a novel. Her first collection “Crocusinte Niyogangal” was published by Malayalee Literary Group in London

Kairali Books published her second collection “Petrograd Padunnu” marked by PK Gopi as poems that burst forth with the creativity of humanity.

The novel “Samaya Dhalangal”, which was the third book set in England’s backdrop, too grabbed the readers’ attention.

A gifted writer, Beena Roy has also penned thirteen songs in various music albums. The albums are Brindavani, Indeevaram, Nilatulli, Swaradakshina and Saveri. The songs are sung by Vijay Yesudas and Roy Sebastian.