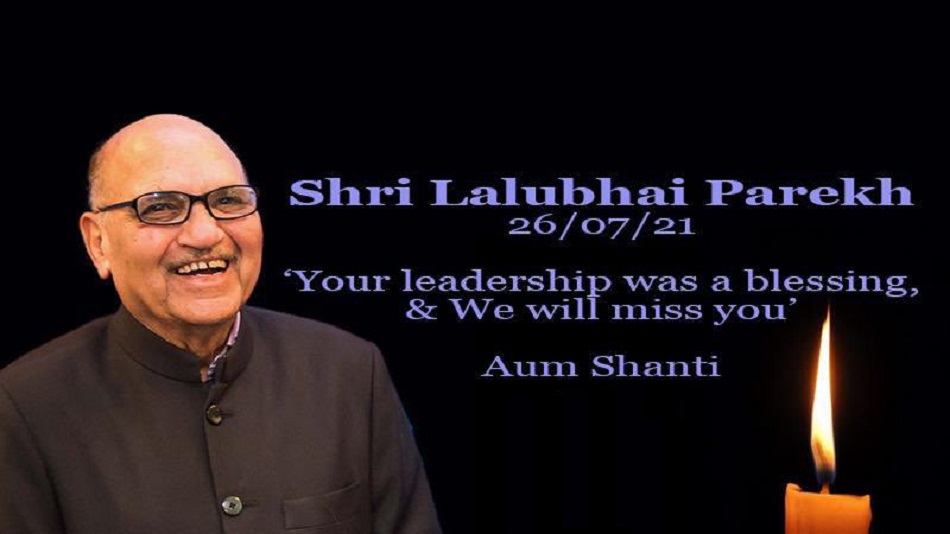 LONDON Aug 5: Lalubhai Parekh was a noted community leader and influential British-Indian leader, who passed away on 26th July 2021 in London.

Having been in the UK for over fifty years I naturally had the opportunity and time to attend innumerable community meetings in places like India House, Nehru Centre etc. Lalubhai used to be present at many of the meetings in which I used to participate, gradually we became friends and I came to know him rather well.

I found him unassuming, knowledgeable and very friendly. He was always calm and in a positive frame of mind whether talking about the past, present or future for that matter.

Lalubhai was involved with and in charge of managing a number of community organisations including; the overseas friends of the BJP and the Federation of Gujarati Organisations. He was kind enough to invite me to some of their special meetings to attend and on occasion to address. I found his gentle, refined, humble and inclusive approach in relation to people very remarkable.

He had spent many years in Tanzania before arriving in the UK and I recall that while talking about Julius Nyerere, the late President, he seemed to look back with delight upon his time there as well his interactions with President Nyerere in the course of his legal work. I found Lalubhai’s thoughts about his African experience immensely positive, refined and cultured.

I often felt that he felt proud of his Tanzanian experience and appreciated everything from the beautiful landscapes to the people and its leadership.

I felt that Lalubhai was a well-liked community leader who rose above partisan politics and in doing so was able to bring together different divisive groups and bring out the best in them, wherever he found himself.

In short he was a born leader and a role model for the Indian Diaspora, always encouraging us to keep our feet on the grass and lead a life that meant keeping our heads high no matter where we were.

Above all he was my friend who was well loved and will be well missed by anyone who was lucky enough to know him. I for one shall treasure the memories of all the conversations and time I spent with a man who had so much more to give.

Dr Cyriac Maprayil is the Executive Director VK Krishna Menon Institute in London. He is also Vice Chairman The India League (UK) and Literary Editor of NewWorld Weekly (London) and Chief Editor of Indians Abroad. He can be reached on drdrcyriac@yahoo.co.uk