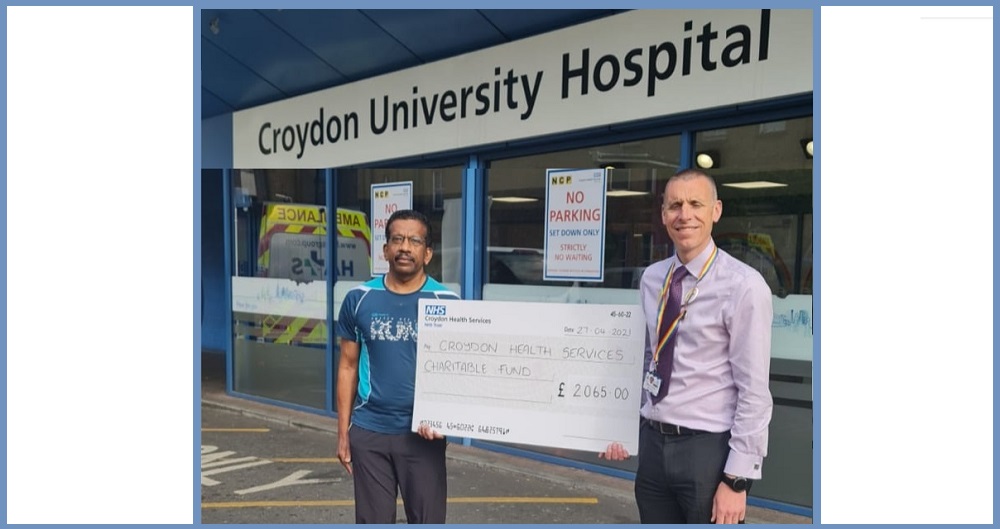 LONDON May 15: The Vitality London 10km event, hosted by London Marathon, was decided last year to be a virtual event due to the Covid pandemic.

Under these circumstances, Ashok Kumar from Croydon, declared solidarity with Croydon University hospital and staff and successfully ran 10km through adverse weather on his own chosen route around the hospital and raised £2,065.

Ashok Kumar started from the main entrance of Croydon University Hospital on Woodcroft Road and completed the 10 km journey around the hospital in 1 hour and 6 minutes via Meadowview, Kingswood Avenue, London Road and Mayday Road.

The £2,065 raised through the Vitality 10km virtual run was handed over to Chief Executive Matthew Kershow as a mark of respect to the entire staff of Croydon University Hospital in recognition of their unique work.

Ashok Kumar, who started the London Marathon in 2014, has completed nine major marathons in six years and seven world famous half-marathons seven times and has made contributions towards various noble causes.

Ashok Kumar is the only Malayalee to have completed 6 major marathons in the world and is also known as a person in charge of various charities in the UK.

Ashok Kumar thanked all those who participated in the Vitality London 10km Running Event and all the friends who contributed.