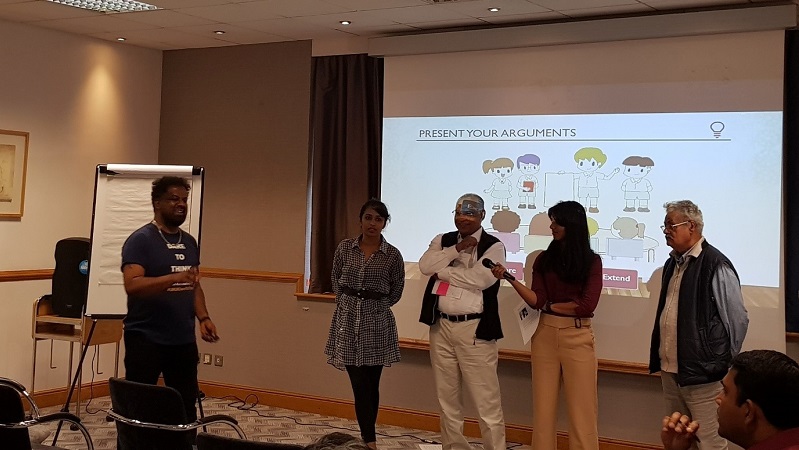 Ryan was responding to a query as to why he likes science during the felicitation ceremony at the end of the annual conference of URUK (United Rationalists of UK). He was one of the 16 young people felicitated for producing 2-3 minutes videos based on a topic in science that the organises had named ‘Make the Cut.’

The video production by the children itself was part of an effort to promote scientific thinking in our community and Ryan’s words summarised the philosophy behind the URUK’s efforts.

“I refreshed my mind during this day, for which I had no opportunity since I came to UK twelve years ago” said Wilson James, 35 who is the secretary of an association and had attended the conference purely out of curiosity.

“My eyes were opened, when I saw so many resourceful persons in our community who can take us on the path of scientific knowledge in different disciplines,” he added.

The first URUK annual conference held in London on 18th May 2019 had nine speakers in all. However one stood out for it being very interactive and creative. Today creative and critical thinking plays very important role at the University level education and at the workplace.

Very often many assessments of the leading universities looks at not just at what the student has written in the essays and answers but at what creative and critical thinking the student is able to bring into them.

Generally all of us are born with that faculty. Unfortunately our Indian/Malayalee upbringing that emphasises conformity kills of our creative and critical thinking faculties at very early stage. That is why many people think religion that is the forefront of getting conformity is very harmful to the mind.

During the session on Critical thinking Jomon Palakkudy, a specialist grammar school teacher divided us into groups and asked us to think how we would deal with the case of a teenager who had used social media to express his dissatisfaction at the poor performance of an athlete.

He asked us to take the side of the teenager who posted the comment, the athlete who was the victim, the lawyer etc. He showed us how he incorporates critical thinking into teaching sessions, which he does every working day.

But all schools do not do that type of sessions as they lack funds to appoint specialist teachers. But children going to ordinary schools have to compete with them in labour market and you know who are likely to be the winners. The session had group presentations which meant it also develops presentation skills.

I thought sessions like these are important for parents as, if parents use critical thinking in their dealings in the family, it is likely the children will absorb them and act as a good substitute for what their schools may not provide or provide indadquately.

Should our associations know the significance of critical and creative thinking for the future prospects of our children, Jomon would be a very person conducting these type of sessions in our association and family gatherings.

Job market projections show most of the new jobs that would be created in the future will need the job seeker to have these skills in abundance. Some promotion of them in our association and family gatherings can be a great boost to the generation next.

“May be I should try to conduct some of these sessions in our association. But I am afraid only my family may attend,” Wilson James reflected at the end of the session.

The children’s enthusiasm for the next conference was in contrast to the pessimism of Wilson.

The videos presented by the children showed they have made the cut in scientific thinking, can our associations be left behind?

Presentations of other children https://www.youtube.com/playlist?list=PLrTOxoDHrXCPgBW0qt34EpRvmmVzocu88&fbclid=IwAR1bHJkI5kAqL0Ywht0LlxDWdYG5RMMiRSxWyAsc-H7rCtuCmez98N_aNRg