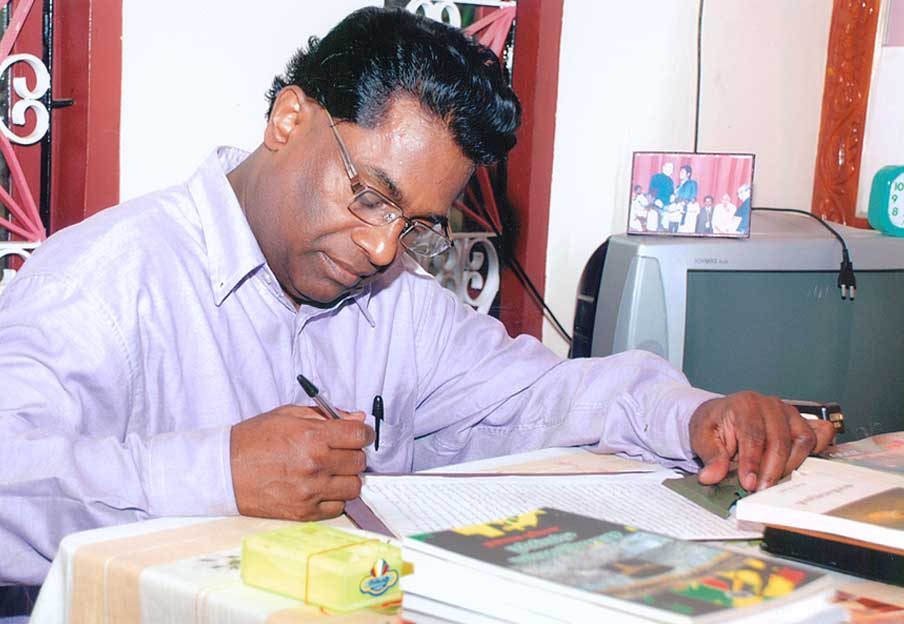 May 01:Nimmi gets out from the medical store, crosses the railway over bridge and reaches the bus stop. She wants to get back home as early as possible. She feels a certain anxiety that she had never felt before. My child is alone at home.

Is she ok?  The moment Nimmy begins to think of her, her entire body starts to tremble. She feels an urge to puke and her head rolls. Without knowing what to do, Nimmy looks around in panic. Tears flood her eyes all of a sudden.

It was while she was reading the afternoon newspaper that she read the two-column news with the title, “Tomorrow this could happen to your child too!”.  A 4th grade girl was molested by the school bus driver. The bleeding child is now in the ICU. The police are searching for the accused.

Nimmy does not read the entire news. Her heart beats faster. Without her colleague K.C. Sateeshan who sits next to her noticing, she adjusts her sari; she feels her entire body profusely sweating. Nimmy expresses her concern if the office fan has slowed down.

He in turn stares at her in surprise.  She takes the loose end of her sari and wipes away the sweat droplets on her forehead.

She does not wait for her office hours to end. She gets out on the pretext of a bad headache. Her boss tries to console her saying that it could be a sinus issue. Nimmi does not listen to any of that. She just wants to get home somehow.

Her usual bus would take some more time to arrive. As she rushes to the bus top, she stops by the medical shop to buy a higher dose of her sleeping pills.

The shopkeeper smiles at her furtively. Nimmy couldn’t care less. In fact, Nimmy actually stops by the store to buy her monthly sanitary napkins. But she chooses to get just her sleep reliefs.

At the bus stop, Nimmy prays that the bus should arrive before the usual faces throng the bus singly and in group. She feels an unnecessary urge to urinate.

Has something happened to my child? The more Nimmy thinks about it, she become nauseous again. She closes her eyes tightly at the horrifying sight of all the vehicles rush towards her in a row. She feels as if their rumblings sound more daunting than ever.

The school bus usually arrives for the pickup in front of her house before she leaves for office. She and her child has rented a house in the city and were living alone. Her husband would visit them once in a week.

If he fails to come, Nimmi would take the child to his place of work. Nimmy maintained her marriage quite mechanically. She reminded herself of it during the weekend as an activity that needs to be completed.

The child is excited about the school. As soon as Nimmy gets into the kitchen to make breakfast and heat up her lunch from the fridge, the child calls out from the bathroom.

“Amma, did you iron my uniform? …Is my lunch ready?… Did you cover my two-line notebook with brown paper?… Did you go through my sketches?” OMG… I haven’t polished my baby’s shoes yet.  Nimmy would call out an Ok as an answer to all her questions, yet the child would continue to express her concerns.

Nimmy would often tell her colleague how there is a daytime wrestle between the mother and daughter. But she would not be surprised by it and would continue to talk about the latest news on the reality music TV program, Idea Star Singer.

But Nimmy conveniently rejoiced at the pleasure of repeating this. But what annoyed her was the prying looks of the school bus driver. Initially, it bothered her. She felt like a thief whose privacy was usurped.

Later, she tries to pay no heed to him. In the mad morning rush back to the bathroom, in the agony of standing on the steps of the crowded bus to the office, in the thoughts of the grocery to be bought on her way back from work, she would ignore this small problem.

But this morning he gave such a weird look! She felt as if she was naked. He had those blood sucking looks! He has a bat’s eyes. With the long lips it sucks the blood off, piercing the fur of every other body. Within the heart, there was a twinge more painful than the birth pangs.

Being mere bones and skin, the prey has no power to walk a step after all that blood has been drained. The eyes get sunken.

The bones that protrude from the chest block my hands. Every morning, Nimmy would recollect an English movie she watched accidently on Star Movies.

Even though she was determined to never remember the movie, still every time she sees this man’s peering looks, she immediately remembers the movie. On that day too, she recollects the movie.

The bus driver is a terrifying alien from another planet. Even when he is trying to wet his lips by sticking his tongue out, Nimmy feels as if he is getting ready to suck blood.

She feels like crying out aloud. When she remembers that her daughter travels in the bus driven by that blood sucker, she forgets that she is at a bus stop and that there is a huge crowd all around her. She tries to cry silently. But she feels a hook tugging within her throat.

She feels as if someone just inverted and kept a heavy object on her head. Within her stomach, sprouts a burning sensation as though a volcano has just erupted. Suddenly, the bus comes earlier than the scheduled time.

Though Nimmy gets a seat to sit, she does not sit. While the bus conductor walks up to her to find out the reason for that, she simply smiles at him indifferently.

Nimmy yearns desperately for her destination bus stop. She feels that the bus is moving slower than its normal pace. The boredom of the view around her makes her seriously tremble.

The bus carries many school children. She remembers her own child as she watches a helpless child among them, standing there with revulsion towards the bus conductor who rubs against her for no reason. Wonder what she is doing now.

Is she in the hospital ICU amidst all the IVs? The mask at the end of the oxygen cylinder thrust into her mouth…a state of utter helplessness, unable to cry, powerless to move or react? Would she be surrounded by female doctors? Would any male doctor be pressing down his stethoscope onto the girl’s chest and hurting her?  Nimmy unpins her pin that supports her sari with the blouse right above her underbelly.

It shines as a sharp weapon in her hands. She keeps the pin whose edge was craving for blood, close to her index finger. She closes her eyes for a second.

She feels a radiance in her eyes just like when she prays kneeling at the altar of God. That spreads upwards like a whiff from her eyes into her head. Her hands and feet feel a newfound energy.

The sickening crowd in the bus lingers. Nimmy gets ready to get off the bus. As soon as she alights, like her younger self, she begins to move forward with agility of a player in the basketball court to advance the ball around an opponent by dribbling it to the net. The ball remains spinning securely within her hands like a Sudarshan chakra.

In the unexpected attack, the conductor falls down. He cries out aloud. Nimmy gets down at the stop and hurries home as if she knew nothing. Her child’s abandoned bag awaits her at the threshold of her house. The neighbor’s child comes running as soon as she sees her.

“Chechi… where were you all this while? When we called at your office, they said that you had left early. We received a call from the school saying that your daughter is feeling dizzy.

Her bag was sent back home in the school bus. My dad has gone to the hospital. He says she is ok… see… he had called sometime back. He has asked to go to the hospital as soon as you reach home.”

Nimmy cannot control herself. She bends forward into her child’s bag and peers closely into it. In the subtle shade of the blood stains, she sees a globe revolving and an ambulance with the loud siren reaching her home.