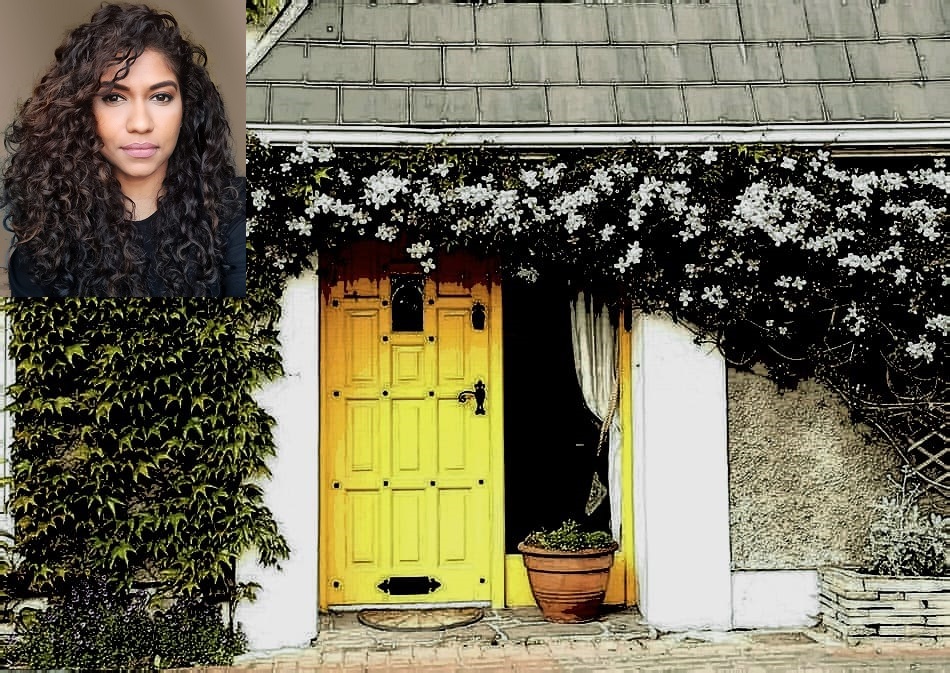 Aiswarya Kurup, Mental Health Practitioner and Project Manager for NHS England/ Improvement pens a short story which highlights the importance of ‘Mental Health and Wellbeing’ during the week of Mental Health Awareness. It is also an effort to reduce the stigma against Mental Health matters within Asian, Black and other minority communities.

If you are experiencing Mental Health problems, speak to your GP in the first instance and in a crisis, a Psychiatric Liaison is always present in all Emergency Departments within NHS. Agencies such as Samaritans (116 123) and Mind can also be contacted for support.

The House with The Yellow Door

It was spring in Palermo which feels like summer in the sleepy village of Writtle in England. She had dried flowers in the corner of the room, some shrubs to contradict the ashy green Eucalyptus leaves and white roses that turned brown which looked so fragile that a soft touch would turn them into dust. I would have adorned the corner with some freshly cut daffodils in a jug of water instead of the dead wreath. You know, therapist’s office and all.

I usually don’t wait in the room for her to come in, but today for some strange reason an elderly Japanese woman who spoke little English let me in. As I plunked down my heavy rucksack before sitting down, she looked at my shoes in disapproval. Never was I asked to take them off, why isn’t there a sign at the door’, I wondered.

“Mio is running late, she come soon. You wait”, said the elderly woman. The authoritative demeanour made me assume that this was Dr Mio’s mother. That is the thing about therapists, we assume they have no background, no story, just an empty canvas with arms out, for us to paint, scratch, and scar. People who use their minds as tools surely must get struck by corrosion, must get rusty and crack.

I have always been an excessive thinker, my mind races with thoughts that I can’t keep up with. If I was to write down precisely what was bothering me, I would overwhelm myself into a panic attack. Some days I come to Mio’s office and think in silence, I feel safe under her wings to explore the unaccountable avenues of deep darkness.

“I am so sorry Rithu, I was stuck in traffic and couldn’t give you a call”, Mio barged in taking off her cape and hanging her bag on a hook behind the door. She was barefooted and walked in with so much grace. After offering me some water, she went straight into the usual, “So Rithu, tell me, how are you feeling today?”

Having felt fine this morning, I said I am jolly good and want to speak about her today. I cannot pinpoint what triggered this except for the notion of intrigue catapulted by meeting Mio’s mother.

“Okay, what do you want to know? said Mio with a smile and before I could respond she said,” You are here paying me to find a resolution to your issues by the way”. Mio isn’t the defensive type, but it was unusual to see a lady in her position feeling slightly nervous about a bit of client curiosity. To my exploration of any ethical issues of discussing personal life with a client, she responded that, as a therapist, it is encouraged for sensible disclosure to enhance mutual trust.

She pressed on to talk about where we left off at the last session which I unreservedly ignored.

“What made you take up this career Mio? Why a therapist and not a lawyer or a journalist?” There was an air of self-inquiry as she looked at me and sat back uncreasing her perfectly ironed burgundy satin blouse. “Hmm, that is a very long story and perhaps for another day”, said Mio in a placating manner readjusting her glasses.

“Right, well I am doing my gratitude journal and I am still struggling to forgive my family for everything”, I said disinterestedly.

A synopsis of my story is that my brother is missing, he has been for the last 6 years and there are strong rumours that he has joined an extremist organisation in the Middle East fighting a war that he believes holds purpose in his life. Being the younger one Rez was loved and pampered by my parents. Such grotesque events in a moderately functional family like mine who lived in a lazy town in England is an idea I often struggle to get my head around. Perhaps my range for what is ‘functional’ is misconstrued.

Before changing my name to ‘Rithu’ and moving to Italy, I was assigned to restore the family honour by marrying my maternal cousin. This was also when I decided to make some strong decisions. A lot of courage and risk was involved in my newfound life as Rithu. Rithu means seasons and after a whirlwind of constant changes in my life, I couldn’t appoint a more appropriate name. Dressed in denim shorts and a velvet choker around my neck, I smiled as I sat back in my shrink’s chair one leg on top of the other.

But as always, any adverse experience in life follows you with its slimy trail and takes on stage in the form of anxiety, depression, and a whole list of unnamed and untamed insecurities. I tried to take my life twice, both times with a certain degree of conviction, however unsuccessful the world may see it. So, I took myself to a therapist’s office after trying the various blends of anti-depressants. And getting to this stage took me a lot of sessions of unpacking the concealed and compressed with this petite Japanese lady, who smiled like an ethereal angel.

“Well, as I don’t have anything to discuss today, am going to call it a day, and please do charge me a full session,” I said as I stood up grabbing my belongings.

“It was a house with a yellow door,” she said looking at me and then at my chair probing me to sit.

I noticed a shift in the energy and for the first time Mio had an air of uncertainty. Perhaps trust really is a matter of mutual interest in a client-therapist relationship. Sensing her nervousness, a surge of power rose in me simultaneously with an ardent need to protect a vulnerable Mio. I prompted her to carry on, assuming that my conflicting emotions were buried far below her sight.

“I hardly spoke with him; I was thirteen and he must have been fifteen or sixteen at the time. As we went to different schools and were not friends, there was no reason for me to find out”, said Mio in her soft sweet voice.

Mio was an only child brought up in the old town of Campagnone in Northern Sicily by her very strict single mother. As a single mother and an immigrant, she took the role of both parents, and as a way of protecting her daughter, Mio was told not to speak with boys unnecessarily or be friends with them.

“Our cottages were 50 yards apart and I used to often walk behind him in silence trying to be a good daughter to my mother who was working two jobs to make ends meet,” Mio explained qualifying her mother’s instructions.

They would smile if they saw each other wider than a certain radius away from their homes followed by total abandon as if entering the Bermuda triangle. Even after daily encounters, neither felt brave to talk to each other. She noted that the boy was often in his own world with friends so little. His smile sparkled when their eyes met, and she would smile back with a sense of great joy.

“I wouldn’t call it a teenage crush or hormonal confusion, but a sense of intrigue, and of course, he was part of my childhood. The evenings when I would take out my pushbike for a ride or while watering my front garden, I often see him walk by, sometimes conscious of my presence and sometimes unconscious of his own” Mio reminisced almost dissociating.

Mio fell silent as if she was narrating something in her mind, eyes parked and as I tapped on her shoulders, she looked at me and smiled.

“So, one day as I was sipping on a cup of hot chocolate and gazing down the valley, I saw him coming back from school, dishevelled shirt and face dusty and tired from a regular day at school” Mio narrated. “Looking his usual busy-minded self, there was not going to be any eye contact or smile. Throwing a stick into the dry leaves within my yard, I created a commotion for which he fell for. Without stopping he walked by passing an angelic smile at me. This made me happy, turning around to make sure mother was not catching sight of this, I smiled to myself in simple teenage delight”.

“As the cricket bugs started their daily orchestra, I was getting set to do my homework for Miss Russo’s Math class the next day. And then I hear a scream, vivid, urgent and conclusive. In my thirteen years of life, I experienced something new, a human scream so unambiguous. Not that I needed to calibrate, I turned my head towards my house to check if mother heard it too. Running out of the house in her apron, she took my hand and we almost bolted towards the boy’s house,” said Mio with an exaggerated facial expression.

“Till this day, I cannot recollect experiencing a moment so profound as I did that day…”

“A woman was wailing not being able to catch a breath or speak, it was his mother. I looked up to see his dangling ankles through the breaks of the window rails in the upstairs bedroom,” Mio’s voice softened.

“Neighbours rushed in, ambulance was called and in all the chaos all I could hear was one word, ‘Why?’ Why did he do it? Could he have spoken to someone? Anyone?”, Mio voice broke off and she fell silent.

One thing I learned as a patient of Mio’s is to appreciate the silence and the richness of its emptiness.

She did not conclude, but simply sighed and smiled and said, “the house with the yellow door was filled with darkness, but it shined so bright, it fooled everyone”.

Mio was right, I do trust her more and not just that, I feel a renewed sense of desire to live! We all have our journeys and our experiences guide and shape our choices, opinions, and personalities.

Feeling the session closing in, I said “One more question, what does your name mean Mio?”

“In Japanese, beautiful cherry blossom,” she said with heartfelt pride.

Did I mention that it is spring in Palermo…?