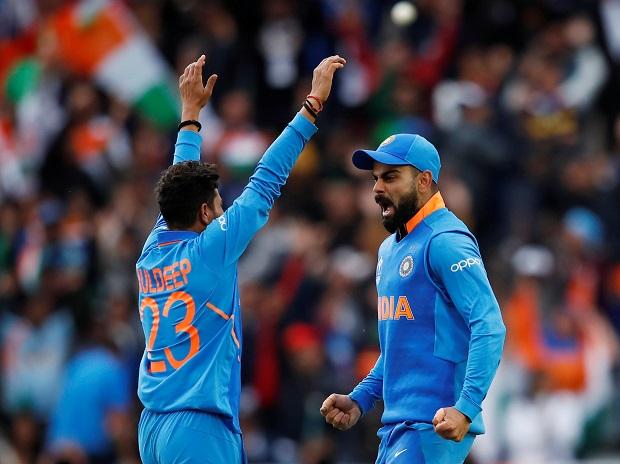 LONDON June 17: India continued their dominance over Pakistan in World Cup cricket with an 89-run win (DLS method) in World Cup 2019 at Old Trafford in Manchester on Sunday. It was a complete performance from Virat Kohli’s team despite a few rain stoppages during the mega clash.

Pakistan were 166 for six when it started raining again and with the match reduced to 40 overs, they were left needing 136 off 30 balls after DLS calculations. In the end, India strolled to a win to make it seven wins in a row against Pakistan in World Cups.

India’s demolition job over Pakistan helped them climb to third in the World Cup points table with seven points from four matches.

While Rohit Sharma and Virat Kohli excelled with the bat, Kuldeep Yadav and Hardik Pandya got the job done with the ball as India completely outclassed a hapless Pakistan team.

Pakistan, chasing 337 to win, were dealt an early blow as Vijay Shankar struck in the fifth over to remove the dangerous Imam-ul-Haq for 7. Pakistan initially found the going hard after Shankar’s strike but both Fakhar Zaman and Babar Azam steadily brought their team on track.

Fakhar and Babar led Pakistan’s recovery with a 104-run stand for the second wicket. But just when it seemed that Pakistan would give India a tough fight, Kuldeep Yadav struck twice to get rid of both Fakhar (62) and Babar (48).

From then on in, it was all India as the bowlers put the squeeze on Pakistan batsmen. With runs coming at a premium for Pakistan, it seemed only a matter of time that India would strike again.

And it came in the form of Vijay Shankar, who scalped his second wicket of the World Cup by sending Pakistan captain Sarfaraz Ahmed packing for 12.

Rain gods disrupted India’s march towards a third win with Pakistan reeling at 166 for six in 35 overs.

The match was reduced to 40 overs with Pakistan set an improbable total, In the end, Pakistan finished with 212 for six way short of the revised target.

Kohli became the quickest player to 11,000 one-day international runs, getting there in 222nd innings as compared to compatriot Sachin Tendulkar’s previous record of 276 innings.

Pakistan left-arm quick Mohammad Amir was his side’s only threat with three for 47 despite two early warnings for running on the pitch.

Rohit Sharma and KL Rahul (57) got India off to a fine start with a first-wicket stand of 137 after Pakistan won the toss.

Their efforts were all the more impressive as they were opening together for the first time at this level.

Regular opener Shikhar Dhawan was sidelined with a thumb injury sustained while making a century in a victory over champions Australia last time out.

Rohit Sharma, who made 122 in India’s opening win over South Africa and 57 against Australia, went to fifty with a six over long-on and a cut four off successive deliveries from recalled leg-spinner Shadab Khan.

Rahul fell soon after getting to fifty when he holed out tamely off left-arm paceman Wahab Riaz, who struck one ball after receiving two official warnings in consecutive deliveries for running on the pitch.

Rohit Sharma went into the 90s with an extraordinary square-cut six over paceman Hasan Ali.

Then a single off Shadab saw him to an 85-ball hundred including three sixes and nine fours. It was Sharma’s 24th ODI century.

Kohli, 71 not out at the start of a near hour-long rain break, fell soon after the resumption when, trying to hook Amir, he ‘walked’ for a catch behind by Pakistan captain and wicket-keeper Sarfaraz Ahmed despite replays appearing to show he didn’t hit the ball.