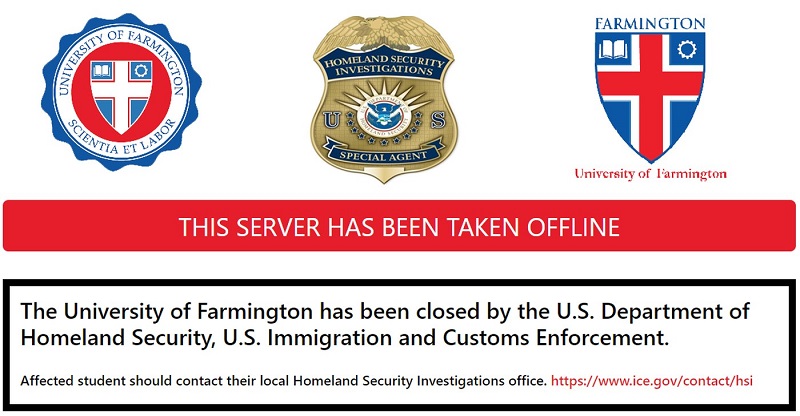 The University of Farmington was a fake university set up in 2015 in Michigan by the U.S. Immigration and Customs Enforcement (ICE) as a part of a sting operation.

Code-named “Paper Chase”, the sting was launched by the United States Department of Homeland Security to expose student visa fraud.A total of around 600 students were involved.

The sting was disclosed to the public on 30 January 2019 with the Detroit News reporting about the Dept. of Homeland Security and ICE arresting eight “recruiters” of Indian nationality, who supposedly made more than $250,000 from the university, and charging them on grounds of visa fraud and harbouring aliens for profit. Around 130 students (of whom, 129 were from India and mostly of Telugu origin) were also arrested for violation of immigration laws and face deportation.

According to the prosecutors, the students enrolled in the university solely to maintain their student-visa status, despite being aware ”that they would not attend any actual classes, earn credits or make academic progress towards an actual degree.”

The University of Farmington’s headquarters was in the basement of North Valley office complex located on Northwestern Highway north of Inkster Road in Farmington Hills.

It had its own website that claimed to ”provides students from throughout the world a unique educational experience” and provided relevant program details along with other allied information.

It also claimed to be accredited by the Michigan Department of Licensing and Regulatory Affairs and the Accrediting Commission of Career Schools and Colleges and was also apparently authorized by the Student and Exchange Visitor Program to admit foreign students.

The university did not have instructors or actual classes. The yearly fee for undergraduates was $8,500, which is very low for US standards. According to Matt Friedman, who worked in the same complex, the university had no classrooms and he never saw anyone there.

In its coverage of the incident, the New York Times quoted Ravi Mannam, an immigration lawyer based in Atlanta, who criticised the operation as “misleading” and accused the government of utilizing ”very questionable and troubling methods to get these foreign students to join the institution”, since some students were under the impression that their enrollment was being made in a legitimate program.

India has issued a démarche asking for the immediate release of the students and requesting against any non-voluntary deportation.