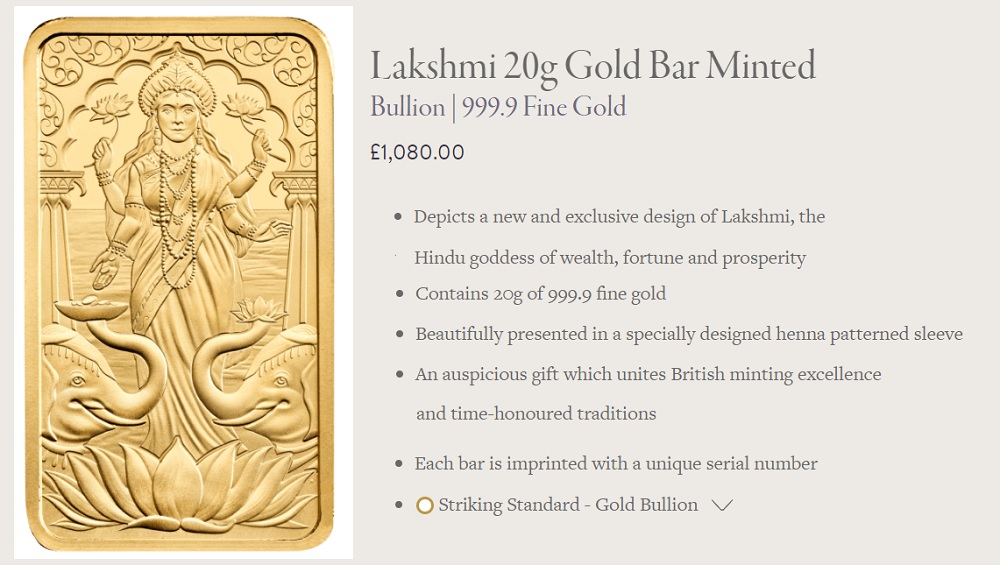 LONDON Sept 29: As part of the Diwali celebrations, the UK Royal Mint released its first bullion bar line portraying Goddess Lakshmi on Tuesday. The Lakshmi bar, a 20-gramme gold bar featuring the Hindu Goddess of Wealth delicately etched into the precious metal, was created by Royal Mint designer Emma Noble in close collaboration with the Shree Swaminarayan Temple in Cardiff.

The Royal Mint describes the bar, which retails for £1,080, as reflecting the Royal Mint’s continued dedication to diversity and inclusiveness and an increase of different cultural festivities throughout the UK.

With gold being a traditional and auspicious present during the Diwali festival, we wanted to create a product that combined beauty and tradition with a modern twist, said Andrew Dickey, a Director for Precious Metals at the Royal Mint. He further said the bar is an excellent illustration of this and were thrilled to collaborate with Nilesh Kabaria of the Shree Swaminarayan Temple in Cardiff to ensure that we correctly and respectfully represented the Hindu Goddess of Wealth.

The bar can be purchased via the Royal Mint’s official website and has an Om symbol on its gift packaging. It follows the popularity of the Mint’s 1 gramme and 5-gramme gold bars in henna-inspired packaging, which were released last year and were extremely popular in the run-up to Diwali.

The bullion bar will also be blessed during the Shree Swaminarayan Temple’s Diwali ritual as part of their Lakshmi Poojan on November 4, which will be attended by Royal Mint personnel.