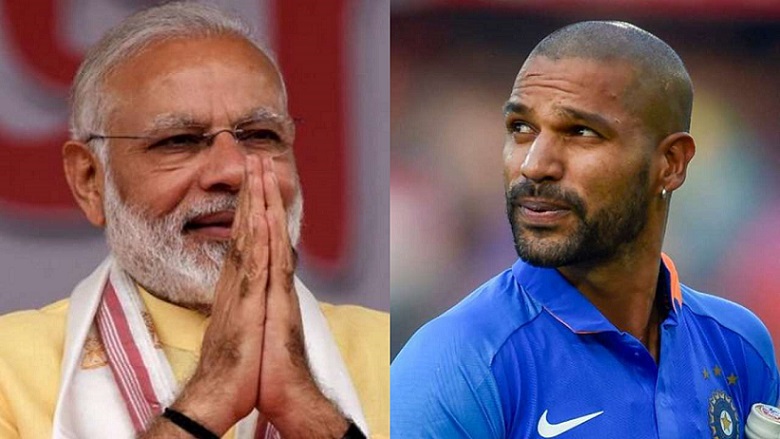 LONDON June 21: Shikhar Dhawan’s departure from World Cup 2019 due to a fractured thumb came a massive setback for all the Indian cricket fans, with many taking to different social media platforms to sympathies and wish him a speedy recovery.

Prime Minister Narendra Modi on Thursday joined a host of cricketers to offer his sympathy to injured India opener Shikhar Dhawan, saying “the pitch will miss you.”

“Dear @SDhawan25, no doubt the pitch will miss you but I hope you recover at the earliest so that you can once again be back on the field and contribute to more wins for the nation,” PM Modi tweeted, quoting Dhawan’s message in which the left-handed batsman had announced he won’t be able to participate any further in the World Cup.

The in-form batsman suffered the injury while facing Australia’s Pat Cummins in India’s second match of the tournament at the Oval on June 9.

Despite the injury, Dhawan carried on batting and scored a century to earn the man-of-the-match award as India beat the reigning champions by 36 runs.

But the 33-year-old left-hander did not field and has not featured in the World Cup since his century at Surrey’s headquarters in south London.

After the announcement by the cricket board, Shikhar Dhawan took to Twitter and posted a video for his fans and well-wishers. “I feel emotional to announce that I will no longer be a part of #CWC19.

Unfortunately, the thumb won’t recover on time. But the show must go on.. I’m grateful for all the love & support from my team mates, cricket lovers & our entire nation. Jai Hind!??,” Dhawan tweeted with the video.

Dhawan has been replaced by young Rishabh Pant in the Indian squad. Many former cricketers from India and abroad also offered words of sympathy for Dhawan, wishing him a quick recovery.