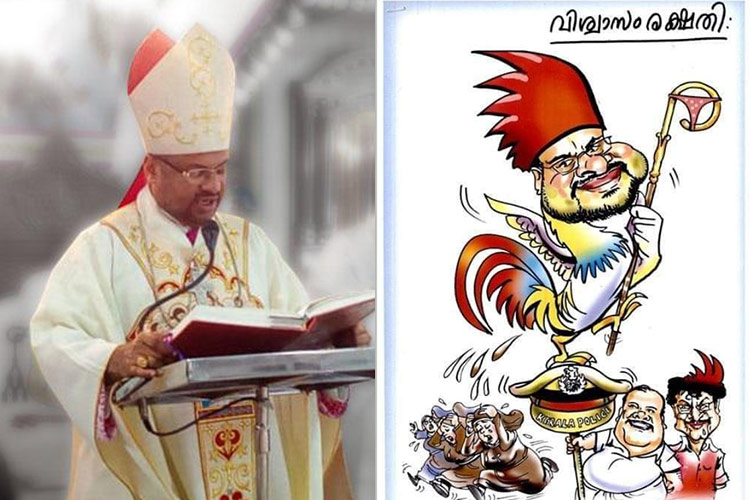 KOCHI June 13: A row has erupted in Kerala over a state-run akademi honouring a cartoon depicting Bishop Franco Mullakal as a rooster and alluding to the charge of rape against him with a furious Church condemning it as vulgar and saying it amounted to humiliating Christian symbols.As the Kerala Catholic Bishop Council (KCBC) demanded withdrawal of the Kerala Lalithakala Akademi’s decision to confer the best cartoon award, the CPI-M led LDF government Wednesday ordered the akademi to re-examine the matter.

The KCBC asked whether the LDF government was targeting Christians after reaching a conclusion that the minority community did not stand with the CPI(M) during the recent Lok Sabha elections, in which the Left front won only one of the 20 seats.

The Church urged the government to withdraw the award given to the “vulgar cartoon” and also sought an apology by the akademi officials.

The cartoon titled “Viswasam Rakshathi” (protection of faith) by KK Subhash of Chengalam and selected by the akademi for this year’s award, had appeared in a Malayalam magazine last year after Mullakal was accused of rape by a nun.

Showing Mullakal as a rooster, it also has a pair of pink coloured lingerie in the crosier (staff), carried by a bishop as a symbol of the pastoral office, while a group of nuns is shown fleeing.

Hitting out at the state government, KCBC spokesman Father Varghese Vallikkatt said the cartoon was “very provocative and condemnable”.
He alleged the cartoon under the pretext of depicting Bishop Mulakkal was meant to “humiliate the Christian religious symbols”.

Mulakkal, then Bishop of Jalandhar, was arrested by the Kerala police in September last year amid a public outrage after a nun alleged she was repeatedly raped by him in a convent in Kottaym district between 2014 and 2016. He is out on bail.

Kerala Culture Minister AK Balan said using a religion’s symbols in a manner of hurting sentiments of its followers in cartoon cannot be accepted.

Akademi chairman Nemom Pushparaj said it will not encourage anything that hurts communal harmony.

However, Kerala Cartoon Academy, an organisation of cartoonists in the state, expressed anguish over the controversy, saying the award was determined by a committee comprising eminent cartoonists.

The award carries a cash prize of Rs. 50,000, memento and certificate.