LONDON May 22:Union of UK Malayalee Association (UUKMA) has joined the protest raised by a group of stranded Malayalees in the UK.

A Whatsapp group titled Malayalees Stranded in UK, formed by Anoop Sasidharan and Sanjay Menon, brought together those stranded in the UK during the time of the lockdown and have been sharing information with each other and providing the mutual support needed for some time now.

This website caught up with Anoop who started the group, he says: “I started this group to gather all Malayalees who were stranded in the UK including my parents. I could see many people posting on High Commissions Facebook page without getting any response and decided to form a group. Many from the group including my parents were able to travel on the flight on 19th May and because of the group we were able to help many senior citizens and pregnant ladies with their baggage, forms filling etc. There are still many people waiting to travel and we are trying to ensure we do everything we can to raise issues with the authorities to ensure everyone gets to safety.”

It was at this time UUKMA too joined hands to help the group to raise the matter with the authorities concerned. Newspapers in India too have taken up the matter and therefore its hoped there would be some actions taken for the benefit of the Malayalees stranded here.

Complaints were made by hundreds of stranded Keralites who were denied air ticket by Air India in spite of the Indian High Commission shortlisting them for the journey for 19th May 2020 based on the priority category.

The process was that all those who were stranded and looking to return to Kerala had to complete a form which will be vetted by the Indian High Commission in London. Following this procedure the High Commission would issue the shortlisted people with an email stating that they will now be contacted by Air India for them to be issued with a tickets to fly back.

However, several of those who received the call from the Indian High Commission in London never got the follow up call from Air India. Several of those who got the call from the Indian High Commission travelled to Heathrow airport in London in spite of not getting calls from Air India on the belief that they may ring them the following day or that they may be able to collect the tickets from the Air India office at the airport. However, none of this materialised.

Now, newspapers and medias too have taken up the issue and interested in taking issues further and be investigated if there are malpractices heard. 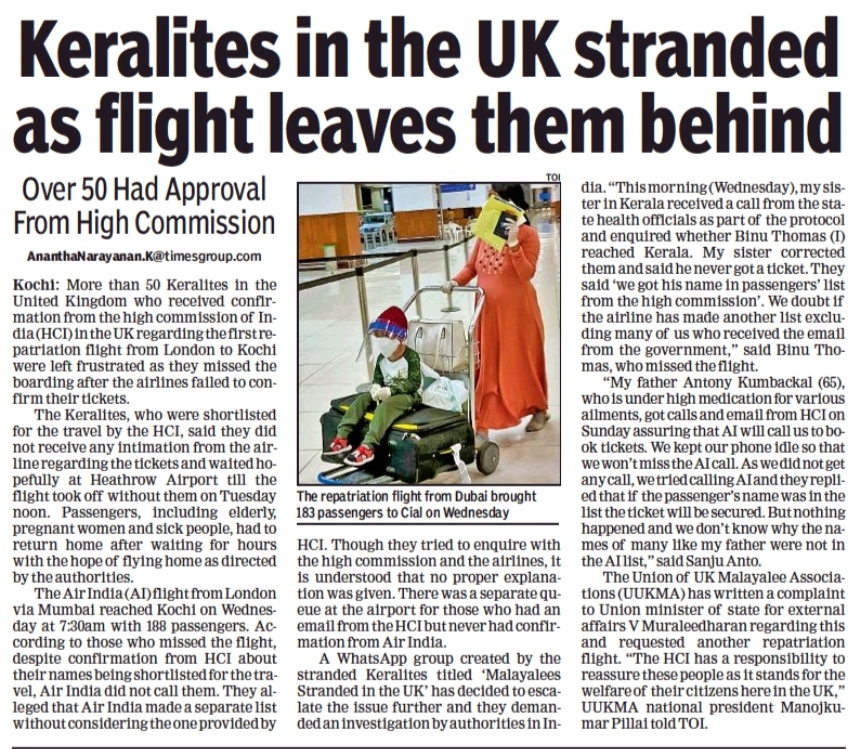 “We would like to draw your kind attention on the unfortunate things happened to people who register their interest to travel back to Kerala, India. Hope you are aware that there are several of those people who received a call from the Indian High Commission to confirm that they are on the priority list and that they will receive a call from Air India for them to be repatriated to Kerala on 19th May have never got the call from Air India and are still stranded here in UK.

Several of those who got the call from HCI never got the call from Air India and therefore they couldn’t reach Kerala and this has caused so much inconvenience & monetary loss to these already distressed people. 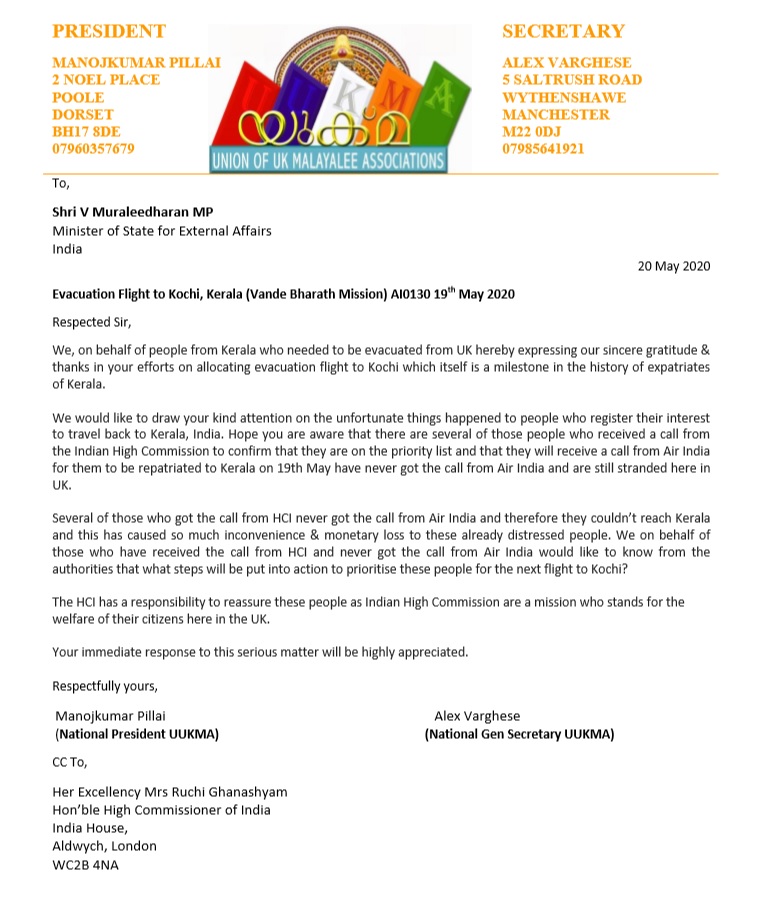 We on behalf of those who have received the call from HCI and never got the call from Air India would like to know from the authorities that what steps will be put into action to prioritise these people for the next flight to Kochi?

The HCI has a responsibility to reassure these people as Indian High Commission are a mission who stands for the welfare of their citizens here in the UK. Your immediate response to this serious matter will be highly appreciated.