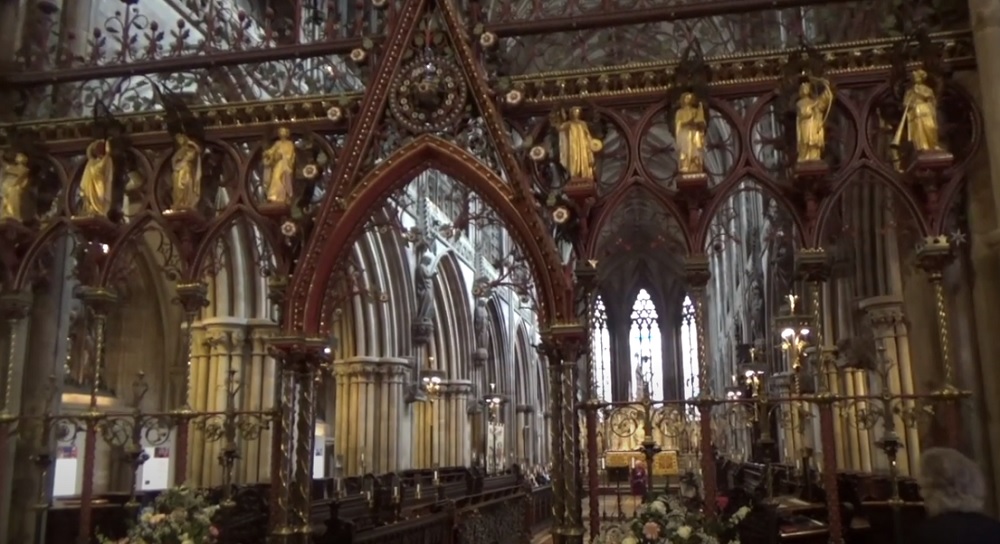 BIRMINGHAM: Recently I paid a visit to the Lichfield Cathedral near Birmingham. I made me reflect on the fate of cathedrals and churches in the United Kingdom.

Cathedrals are amazing monuments that showcase technology and art that had existed in the past. They instantly transport us back into history. None visiting a cathedral can stop ruminating over the wonderful structures, the people who built them and the purpose for which they were created over many days after the visit.

My visit to the Lichfield Cathedral located north of Birmingham has been no different.

Most of the cathedrals in England were under monastic control. During the reign of Henry VIIIth, these monasteries were dismantled, and their structures were demolished. Cathedrals affiliated the Church of England were built often at a new venue.

The fate of the Lichfield Cathedral was different. It was not only spared but was restored and renovated upon again and again to become the gigantic structure that we can admire and wonder today. It was not demolished by the forces of Henry VIIth because it was not under the control of any particular monastic order.

Monastic orders such as the Benedictines and Cistercians owned huge tracts of land and were de facto rulers of the surrounding area controlling the faithful thanks to their spiritual and material power over them. In order to consolidate his power over Enalnd Henry VIII took over the land that were under the control of various monastries, defrocked the monks and demolished the monasteries.

Saint Chad is credited to have founded the Lichfield Cathedral in 670 CE, after he was made the bishop of Lichfield at the request of the king of Mercia. St Chad was one of the four brothers who became clerics. His brother Cedd also became a saint. St. Bede writes that six days before his death St. Chad had seen some angels arriving to take his soul to heaven. This story became part of the mythology associated with Lichfield. He was buried in a different church but later his remains were brought to this Cathedral which now holds his name now. Eight bones supposedly belonging to him are held in a bejewelled container.

Besides the bones of St. Chad the cathedral also holds many other holy relics. In 1345 the sacristan of the Cathedral made a list of the relics held in the church. The list included part of the mounts of Calvary and Golgatha, bones of saints Saint Stephen, and S James, Wood from the true cross of Jesus, part of the cross on which St. Peter was hanged, some relics of the Innocents, part of sepulchre of Mother Mary and many others.

The frontage of the cathedral has 113 figures. These are of angels, prophets from the Old Testament, the apostles, Mother Mary, many saints including St. Chad, many archbishops and numerous kings of the kingdom of Mercia.

Every year thousands of pilgrims travelled hundreds of miles to experience the miraculous power of the relics. One can imagine the mental state of the pilgrims. They must have been preparing for months through fasting and prayer and penance. As the pilgrims approach the cathedral, they confront the saints and other heavenly dwellers on the frontage of the cathedral. Elevated by seeing the statures of the heavenly dwellers, the pilgrims enter the cathedral and approach the various relics in reverence surrounded by the various stained-glass windows that depict the life of Christ.

The pilgrims are transported to the heavens for few moments and are likely to feel one’s mission in life is completed. He or she would return home determined to pray more, pay more and obey more intensively the bishops and priests and thus achieve self-actualisation.

The cathedral displays the decorated gospels, known as St. Chad’s gospels. These gospels were created 50 years after the death of St. Chad.

The abundance of relics made the Lichfield cathedral an important place of pilgrimage for Christians of Europe for many centuries. But today nobody comes here in search of miracles or cure or to be transported to the heavens. People come here to wonder at the architecture and the arts displayed here.

The story of the changing fortunes of the gods and saints of this cathedral tells us an important commonality in the nature of humans and gods. Both have an expiry date. The gods and saints who worked miracles yesterday have become helpless today.

No doubt the powers of gods and saints are determined by humans and their material circumstances. Gods and religions did play a very important role in the history of humanity as an organising principle. Today they play a very different role in the advanced countries. They are relics of the past, something that raises our curiosity not our respect and veneration.