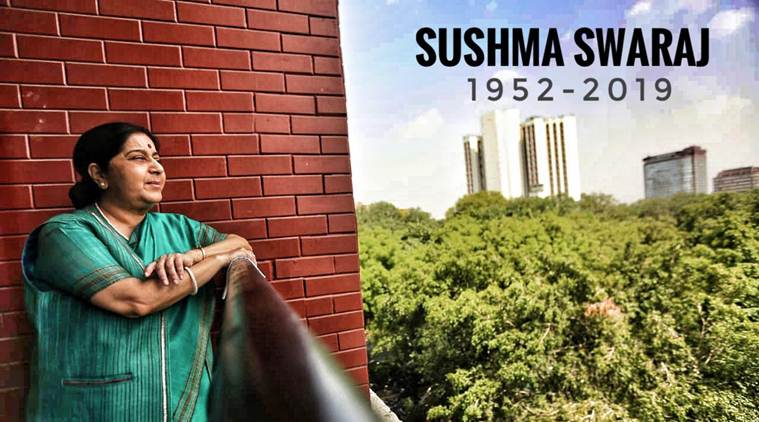 New Delhi Aug 7: The body of former Union minister Sushma Swaraj will be kept for three hours at the BJP headquarters today for party workers and leaders to pay tributes, BJP working president JP Nadda said.
Her last rites will be performed at the Lodhi crematorium, he said.
Ms Swaraj, 67, died on Tuesday night at AIIMS after suffering a cardiac attack, doctors said.

A host of Union ministers and other senior party leaders visited AIIMS and met the bereaved family of the former external affairs minister.
A pall of gloom descended at the hospital as the news of her death left everyone in shock.

“Her loss is irreparable and the void left by her can never be filled. It”s a huge loss to the party and the nation,” Mr Nadda said. The body was later taken to her residence in Delhi.

Mr Nadda told reporters the body will be kept at the party headquarters from 12 pm – 3 pm for people to pay respects today after which it will be taken to Lodhi Crematorium for the last rites.

Ravi Shankar Prasad said it was a personal loss for him.
“We used to address her as ”didi” and the respect she commanded was phenomenal.

She was fine in the morning and then suddenly we got this news. It is a painful loss for me and for the nation,” he told reporters.

Senior BJP leader Shahnawaz Hussain also grieved the loss, saying Swaraj had guided him in his career and “she was a leader liked by everyone, from the ruling to the opposition parties”.

COMMENT
Her contribution in the external affairs ministry is substantial as she left a mark in the field, he said.