LONDON Sept 16: Britain has returned stolen sculptures of Lord Ram, Sita and Lakshman to India after 40 years. The idols were stolen from a temple in Tamil Nadu in 1978. The temple was built-in Vijayanagara period.
In a Tweet the High Commission of India in London said: “Auspicious moment as 3 more priceless statues of Vijayanagara period stolen from Vishnu temple, Nagapatinnam in 1978, recovered by @HCI_London with support of #MetPoliceLondon, restored to Govt of Tamil Nadu in presence of Hble Union Min for Culture&Tourism Shri @prahladspatel”.

In August 2019, Indian high commission in London was informed by India Pride Project that 4 antique idols –Shri Rama, Sita, Lakshmana and Hanumana, stolen from India, may be in UK. 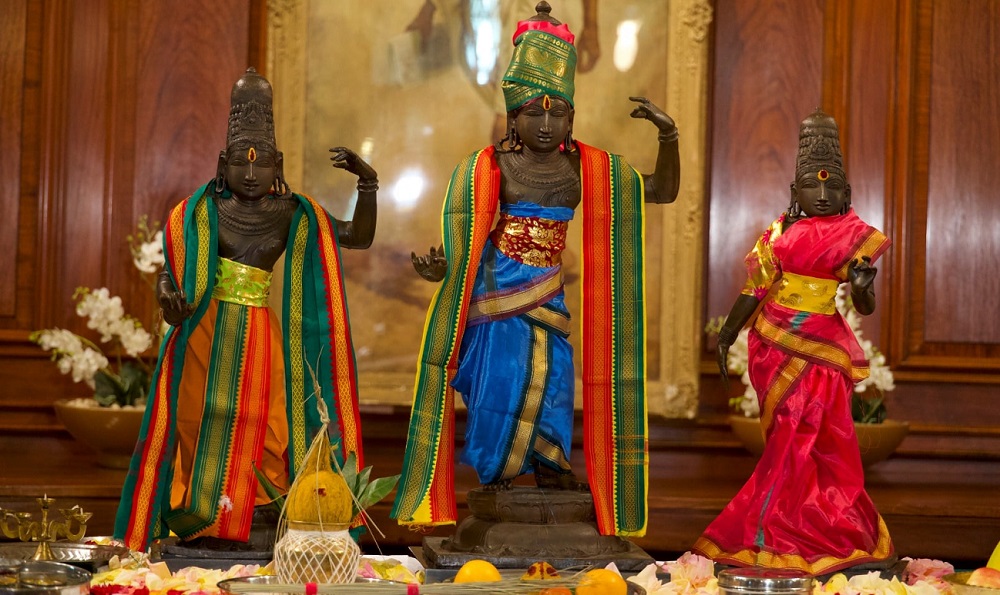 The Indian mission raised the matter with Art and Antique Unit of the London’s Metropolitan Police and Idol wing of Tamil Nadu police. Tamil Nadu police sent a comprehensive report confirming the theft of 1978 and also provided the expert opinion about the match of the idol with a photo archive.

The London Metropolitan Police who investigated the matter contacted the present owner of the statue and conveyed Indian Mission’s request to return the statue as they were stolen from a “living temple” in India.

The London Metropolitan Police who investigated the matter contacted the present owner of the statue and conveyed Indian Mission’s request to return the statue as they were stolen from a “living temple” in India.

The art collector had bought the idol on good faith including through a check of Art Loss Register Certificates.

The vendor responsible for the sell is now deceased due to which there were no grounds to open an investigation in the UK.

The owner of the Rama idol was also in possession of two other idols of Sita and Lakshmana which were handed over to the High Commissioner. All the three idols are being transferred to Tamil Nadu Government.

The Indian mission in a statement said, “HCI is working on many such cases at present. We are confident that in coming days, with this partnership of the ASI, law enforcement agencies, and the independent experts, we will be successful in returning many more pieces of our cultural heritage to India.”

The Indian mission in London in the past was able to get back to India, Bramha- Brahmani sculpture which was stolen from the World heritage site Rani-Ki Vav, 12th Century Bronze statue of Buddha, two antiques – a 17th Century Bronze idol of Navanitha Krishna and a 2nd-century limestone Carved Pillar motif.

Earlier this year, the mission sent back Shiva statue stolen from the Ghateshwar temple, Baroli in Rajasthan to India.